Behold, the third and final part of my massive gear review, following this summer’s Green Ribbon. Parts one and two concerned sleeping and eating and clothing, and now I’m finishing with navigation, plus all those extra little oddments which didn’t fit in anywhere else.

As ever, I’m always keen to hear your thoughts on my gear choices and observations, so please do leave me a comment if you fancy it.

Map case – Sea to Summit waterproof map case. Gustav had the rather more technical TPU Guide map case (also by Sea to Summit) and he coveted mine on account of its much simpler and more compact design.

15 maps – Lantmateriet fjallkartan. I could have saved a lot of weight by posting these. Also, Swedish maps take a bit of getting used to. They’re more akin to our OS Landranger sheets than the hiking ones, and while this can give you a nice overview of an area when you’re in the mountains, the lack of detail can sometimes be a bit challenging.

Compass – Silva Classic. Yes, I have the child’s one because I’ve had it since I was a child. Still does the job.

GPS – Garmin E-Trex 30. I bought this last year and I love it. Back home I use it fairly often, usually in conjunction with the OS Maps online tool. For this trip, though, the cost of putting the Swedish mountain maps on it was simply too high, so I found an open source map (decent for national trails, roads and lakes but not detailed enough to navigate by) and mainly just used the GPS for keeping track of my mileage. The ability to get an exact grid reference at any point was a bit of a comfort blanket, even if I only ever used it for this purpose once.

Sheath knife – Fallkniven F1 pilot’s survival knife. A workhorse of a blade that holds its edge wonderfully. Even after days of rain I could cleave thicker fallen branches to get to the drier fuel in the middle. Though I did wonder about the weight. At 150g without the sheath, it’s not very heavy, but a Mora Clipper/Companion is two thirds of the weight, something diddy like a Helle Algonquin is nearly half, while companies like Kestrel make astonishing 20g titanium things. More to the point, does one really need a fixed blade at all? I came to the conclusion that I did. I don’t own any folding knife sturdy enough to baton with, and when you consider the ability to use wood (even reliably in wet weather) against the weight of liquid fuel, I reckon it ‘earned’ its place in my bag.

Penknife – Victorinox Explorer. Used more for the tools than for the blades (I had the F1 for that). I suppose at around 100g I could probably find a leaner model (has anyone ever used the parcel hook?) but I’ve had this one since I was at school and there seems no need to replace it for a tiny weight saving.

Walking poles – one Mountain Warehouse Scafell Extreme, and one homemade. The fancy pole was a forty quid carbon fibre thing, advertised as being ‘superstrong’ and ‘essential for long treks on tough terrain’. After three days it snapped and had to be splinted; after 23 days one of the joints came apart and lots of duck tape was required; after 44 days the metal spike fell off, leaving me with a plastic tip that wore down steadily until the end disintegrated completely on day 54. My other pole was an old stick that I found on Danby High Moor last winter. I cleaned it up with my pocket knife, sanded it, oiled it with linseed, and fitted an alpine ferrule and a lanyard. It weathered the trail splendidly.

First aid kit – Lifeventure. Over the years I’ve skimmed out the sterile needles and sutures, replaced most of the wound dressings as they’ve gone out of date, and added some Ibuprofen and antihistamines, along with my inhaler and epipen.

Mosquito repellent – Djungelolja. The British stuff I took with me leaked (as it always seems to) and was so hardcore that it even melted a small hole in my bag. I threw it away and bought some of the Swedish Djungelolja brand, which worked very well and was considerably less weapons-grade.

Reflective survival blanket. One of those things that you never use until you do. Smaller and lighter to carry than a chocolate bar, this was a godsend when Gustav was lying at the side of the road with a broken arm, trying to keep himself warm for four hours while we waited for help. Always worth taking one.

Satellite transmitter – SPOT satellite messenger. Carrying one of these was a condition of undertaking the Green Ribbon. You can send an emergency SOS even without phone coverage, and you’re also supposed to use the ‘check-in’ function regularly. This sends a pre-defined ‘all ok’ or ‘help me’ email to your specified contacts (in my case my mum and girlfriend), and allows people to monitor your progress on an online map. But it just wasn’t reliable. The check-ins frequently didn’t work, even when the device told me they had, and though you could maximise the chances by giving it a clear view of the sky and leaving it transmitting for at least half an hour, I found that the success rate still lingered around 80%. Others experienced similar issues, and the danger with this, of course, is that if loved ones are expecting to get a check-in message and they don’t, then they’re likely to worry unnecessarily. So a transmitter like this is a grand piece of kit (and could potentially save your life), but everyone needs to be aware of its limitations.

Torch. Why did I take this? It never got dark.

Watch – Timex Expedition WR 50m. I bought this several years ago to use for windsurfing. At the time it was one of the cheapest waterproof watches they had in Argos, and I’ve used it for sport, travel and expeditions ever since. Never expected it to last this long. They don’t make it any more, though this one is almost identical, albeit rather more expensive.

Battery pack – Brunton Heavy Metal. As implied in the name, this was a bit on the weighty side, though the battery life was good. I’m still on the look-out for the perfect power pack. Last year I took a Power Monkey Extreme to Norway with me, and that too was a bit too heavy-duty for hiking use. Anyone got any tips?

Wash/toilet kit – all-purpose soap; toothbrush (I didn’t cut it in half – does anyone genuinely do that?); toothpaste; trowel and bog roll; hand sanitising gel.

Towel – MSR Packtowl (M). As with my Sea to Summit pocket towel, this needed regular rinsing and drying to stop it getting unsavoury. 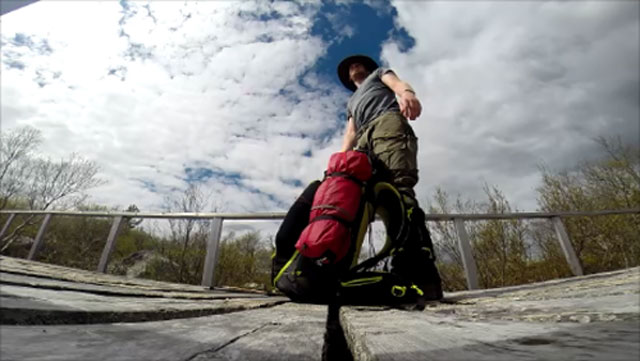