Last summer, I bought myself a pair of Meindl Bhutans, and as hiking boots go they’re hands-down the best pair I’ve ever owned.

The Bhutan is the successor to the Burma, one of Meindl’s most long-standing and popular full-leather models that was in production for well over a decade. Scratch around among the online reviews of the Burma and it seems to have a strong following, not only among hikers but also among farmers and other outdoorsmen. So the Bhutan has good genes.

They market the Bhutan as a three-season boot, but in my experience it’s held its own in snowy and mountainous conditions too. It’s comfortable, waterproof (the lining’s Gore-Tex), needs no breaking in, and features well-thought-out bits of design like a high rubber rand to protect the leather from scuffing in rocky terrain. The memory foam inner makes a real difference too, especially round the ankle, where some boots are apt to rub.

The sole is relatively stiff compared to some other brands of full leather boot I’ve tried (some Scarpas, for example), but I quite like that – it gives you a sort of rolling motion that eats up the miles and doesn’t put too much strain on any one section of your foot.

And as for durability, consider that in just over a year since I bought them, my pair of Bhutans have walked over 2000km in Scandinavia alone. That’s not including all the weekend and day hikes I’ve done in the meantime, or the 15km or so each week that I clock up simply strolling in and out of town. And they’re still going. Inevitably, they’re starting to show signs of their hard life. The leather is beginning to crack in a couple of places, the tread on the soles is pretty worn, and the Gore-Tex lining is not as waterproof as it once was, but the beauty of a full leather boot is that so long as I keep them well-greased, they stay weatherproof and comfortable.

Splendid as they have been, it’s probably time my current pair of Bhutans were switched to gentler duties, so I’ve been contemplating my next pair of trekking boots. The temptation, of course, is simply to get another pair of the Meindls, but there are several other options worth considering.

I’m not a great fan of hiking shoes. I know some people (especially lightweight hikers) who are great evangelists, but they’re just not really my thing. I wear boots most of the time in everyday life as well as on the hill (Doc Martens, Trickers, Redwings) and I find them comfortable. I like a bit of ankle support, and I’m clumsy enough with a big backpack on that it’s more or less essential. I’m also a fan of the properties of leather – that way it has of moulding to your feet, its durability and the way you can preserve it by looking after it.

In the world of more traditional, full-leather boots, I’m quite tempted by the offerings of Alt-Berg. They’re better known for their military footwear, but they’ve got a lot of expertise in hiking boots too, and I’ve heard them well spoken-of. Their boots aren’t ruinously expensive, they come in an unusually wide variety of fittings – which could be handy as I like quite a spacious toe box – and they offer a made-to measure service at their Richmond factory. Best of all, they’re a North Yorkshire firm, and there’s something rather nice about buying local.

Then again, while I was in Sweden I was very taken with the Lundhags ‘shell’ boots favoured by a lot of the Swedes. It’s a sort of layering concept, where you wear a fairly stiff, unlined boot (a mongrel cross of a welly and a hiking boot), and you vary your combination of insoles and socks depending on the conditions. It makes the boots light and adaptable, but the real appeal is when it comes to drying wet boots. The boggy conditions in the Scandinavian mountains, coupled with the number of river crossings, meant that I got wet feet quite often, and if the Meindls had one failing it was that when they got wet, they stayed wet. The Swedes with their shell boots, by comparison, could simply take out their insoles, and the unlined boots would more or less dry in the porch of a tent overnight.

Because the shell boots don’t have a waterproof lining, they have to be very well greased to keep the water out, and people say they need a lot of breaking in, so it’s a system with pros and cons. In Scandinavia I reckon the Lundhags might well be the way to go, but I guess I just have to consider where else I might be walking in the next couple of years. There’s a bit of thinking to be done anyway.

For now, though, let’s hear it for the wonders of German engineering and the Meindl Bhutans. 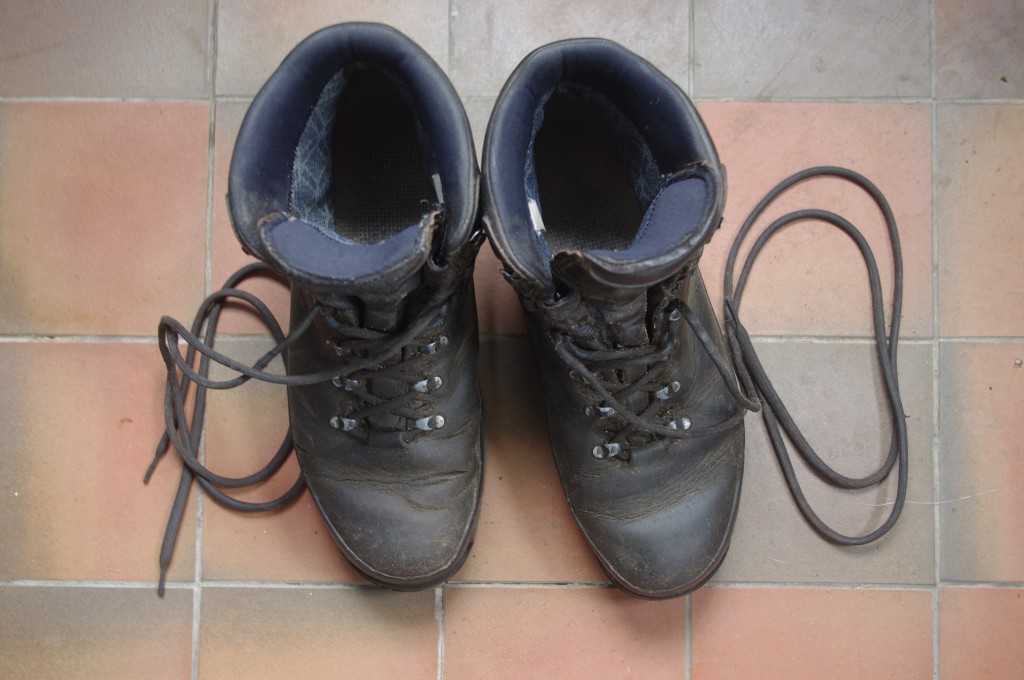