To my shame, it’s over a month since my brother and I slithered down off Hardangervidda, in south-central Norway, and I’m only just getting down to writing about it. Our four-day walk was a sort of warm-down after a week crossing Jotunheimen (which I’ve blogged about elsewhere), and Hardangervidda provided a fine counterpoint to its flashier cousin.

Officially, the boundaries of Norway’s biggest national park enclose three and a half thousand square kilometres of the vast Hardangervidda mountain plateau, but the area itself is much bigger. If you’ve ever been to Norway, chances are you’ve probably seen Hardangervidda without realising it. The famous Bergen-Oslo train line* slides along its northern edge (there’s a distinct musk of sweat and woodsmoke emanating from the windswept outdoorsy types boarding in Finse and Geilo), as does the gorgeous Highway 7. 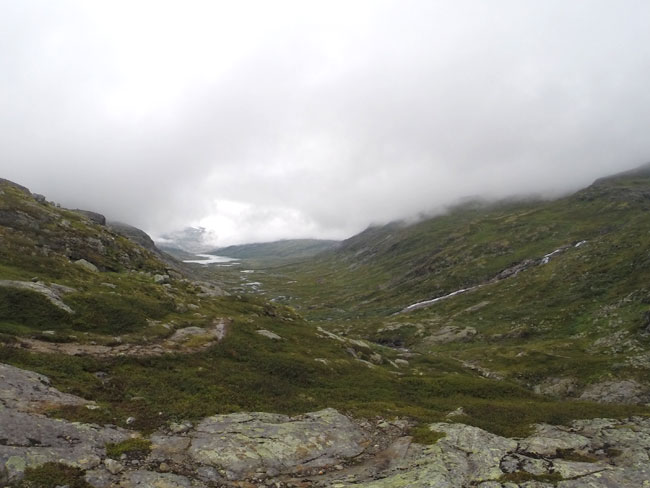 As with our Jotunheimen trip, Christian and I followed a route from Connie Roos’s Cicerone guide to Walking in Norway. Roos rates the western part of Hardangervidda much more highly than its centre (which she describes as having ‘a certain monotony of character’), so we took her at her word. Starting out at Fossli, we headed almost directly south then looped back up to the north west, eventually descending steeply past a string of spectacular waterfalls along the river Kinso to finish up in Kinsarvik. For much of the journey we had tantalising views of Harteigen – a celebrated mountain allegedly shaped like a stovepipe hat – even if the clouds never cleared enough for us to see the top. Along the way we passed the DNT huts of Hadlaskard, Torehytten and Stavali (along with independent Hedlo), though in the event we ended up camping out each night. According to my GPS, the route came in at 79km, and took us four days including travel time.

We got to the trail via an early train from Bergen to Geilo then a bus to Fossli, where we had a bit of trouble finding the trailhead – forgivable since it involved slinking down the hard shoulder of a busy highway then clambering over a barrier by a smear of red paint. As for getting out at the end, it was a slightly convoluted (but actually very conveniently joined-up) chain of two ferries (Kinsarvik-Utne-Kvanndal), a bus to Voss and a train to Oslo. We hit Kinsarvik mid-afternoon and by half midnight we were showered and tucked up in a hotel in central Oslo, which isn’t bad going really. 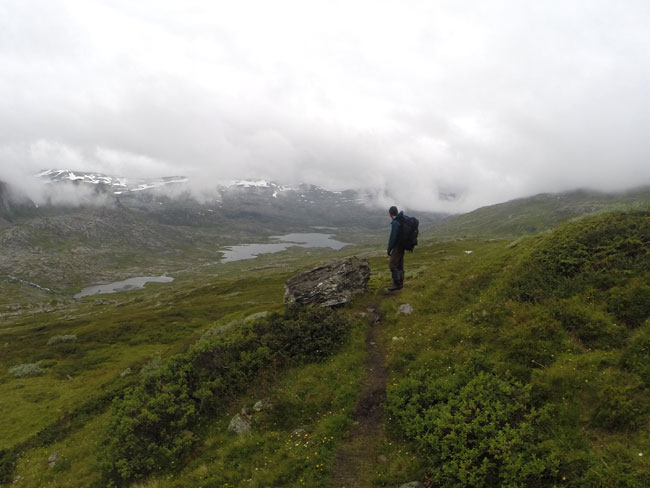 As Christian observed at the time, Hardangervidda feels somehow more familiar than Jotunheimen, perhaps because in places there are visual echoes of Scotland or North Wales. For me there were other reasons it felt familiar too, since the self-service huts, the open spaces, and the occasional cameos from cheery young German drifters or stately Norwegian pensioners with knives on their belts were all much more akin to my previous experiences of rough Scandi tramping than the Alpinist bustle of Jotunheimen. Despite its more modest gradients and more understated nature (‘understated’ being a VERY relative term in this context), Hardangervidda felt somehow wilder. The terrain was characterful and varied, with rushing rivers, occasional snow fields, and sweet berries growing abundantly by the paths. 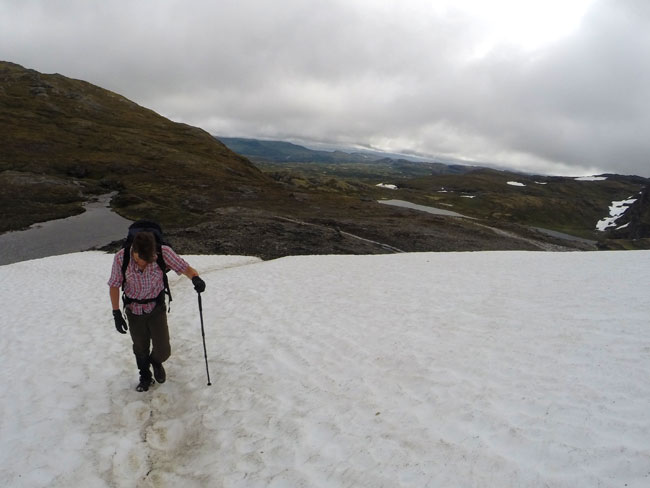 It was also rather wet and surprisingly cold, and watching my brother wading barefoot across a perishingly icy stream first thing in the morning was a pleasure that almost compensated for having to do it myself. The soft, springy ground was sometimes only just dry enough to pitch a tent on, and one night at a high camp we sipped hot coffee in our damp clothes, watching the ever-present cloud swirling silkily through the valleys below. Rain can become a bit demoralising if you get too much of it, but luck was on our side, and the only evening we got a real soaking was followed by a morning of bright sunshine that dried our gear out again. In fact, during the whole fortnight – both in Hardangervidda and Jotunheimen – weather and circumstance treated us pretty kindly, and it was somehow inevitable that calamity should catch up with us sooner or later.

Which it did as we descended over steep, slimy rock towards the Kinso river and our road out. Christian slipped, and we reckoned afterwards that the way his bag shifted on his back must have made him go down hard on his hand. There was a nice audible crack, and though he didn’t make much of a fuss about it, there was no doubt it was the sort of injury that, had it occurred earlier in the trip, would have sent us home. As it was, we were a few hours from journey’s end anyway, and later that night, sitting in the buffet car on the 17.45 train to Oslo, filthy and cheerful, we poured out a couple of anaesthetising beers and toasted our guidebook writer and our adventure of two strikingly different but equally wonderful halves. Norway never disappoints. 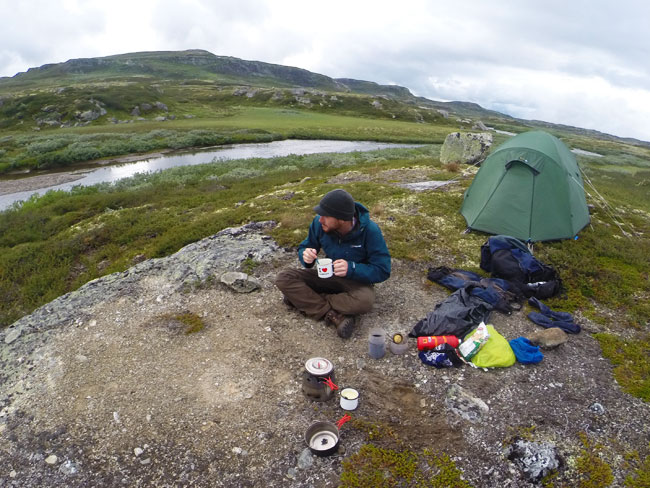 *I was delighted to learn recently that Netflix is now streaming the full 7.5-hour video of this pretty journey, along with several other Norwegian ‘slow-TV’ classics, including 12 hours cruising the Telemark Canal, 24 hours of a salmon river, and a lot of knitting.