This time last week I was beginning my journey home from a snowy week spent winter walking in Bavaria. I was actually on a press gig for walk magazine, and though the full feature will show up sometime in the autumn, I’m tempted to bob up a few brief thoughts about the experience in the meantime.

It was a guided group trip with Ramblers Worldwide Holidays, based in the pretty town of Füssen, on the eastern edge of Germany’s Allgäu region. This corner of Bavaria is a real looker, with cotton-wool snow, conifer woodlands and storybook castles giving the whole place a sort of otherworldy aesthetic, like peering into a snow-globe. 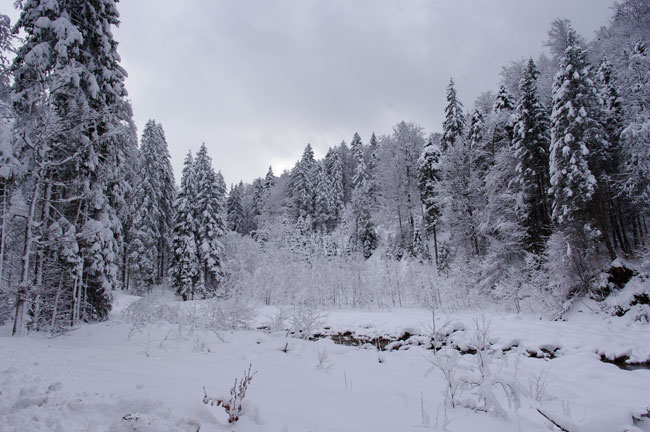 Ludwig’s famous castles are a big draw too, of course, and while there’s an inescapable sense of disappointment about the way you’re buffeted around the interiors on whistlestop guided tours, in many ways the castles are loveliest when viewed from a distance anyway. Tramp for fifteen minutes up the forest tracks and the coach parties melt away, leaving you free to admire Neuschwanstein’s Wagnerian spires or Hohenschwangau’s gaudy yellow ramparts at your leisure through their frame of snow-laden fir trees. 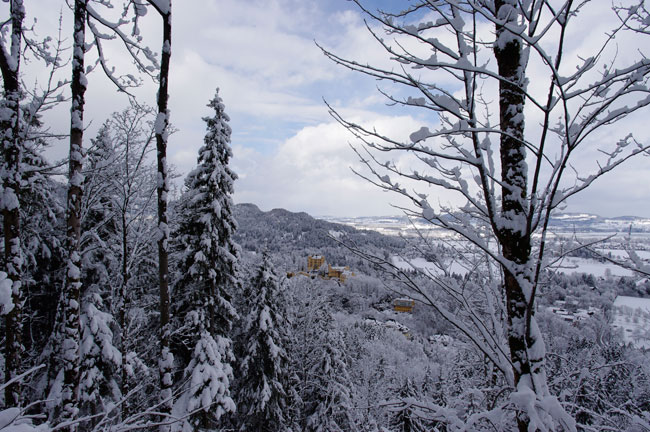 One of the things that struck me most about the region was the accessibility of its winter hiking. Our guide easily got five days of varied walks (usually 7-10 miles/11-16 kilometres) out of the Füssen area, with motorised travel limited to a few 10-minute rides on local bus services. The trails were almost all cleared and gritted, and the gradients weren’t particularly punishing. There were a couple of occasions where we needed ice grippers and poles, but nothing more demanding than that. Of course, bring a pair of snow shoes and your options get a lot wider, but there’s plenty to go at without them.

In terms of conditions, we sort of had the best of both worlds. Fresh, soft snow, but without the harsh temperatures and biting winds that often accompany it. In the whole week we had about half an hour of rain, and there were a couple of days where I even caught the sun a bit. It’s difficult to say whether what we encountered was a stroke of exceptional good luck, but one of the group had a friend who’d reported similar weather on the same trip the previous year, so maybe it wasn’t so extraordinary after all.

Put simply, it’s an area that gives big rewards for very moderate effort. Most days we ate and drank well at mountain lodges, and a gang of 16 well-travelled, outdoorsy sorts made for genuinely entertaining company. Our guide, Ursula, was an easy-going German lady who gave us plenty of rope, and even as an inveterate solo trekker I could see the appeal of this kind of sociable group holiday – relaxing and invigorating at the same time.

That’s not to say I didn’t have my beady eye out for longer-distance possibilities, and I’m highly tempted by a return visit in a warmer season to walk the Lechweg. Looks like it’s about a week’s trip, with the potential to be pretty spectacular. Suppose I’d better stick it on the list. 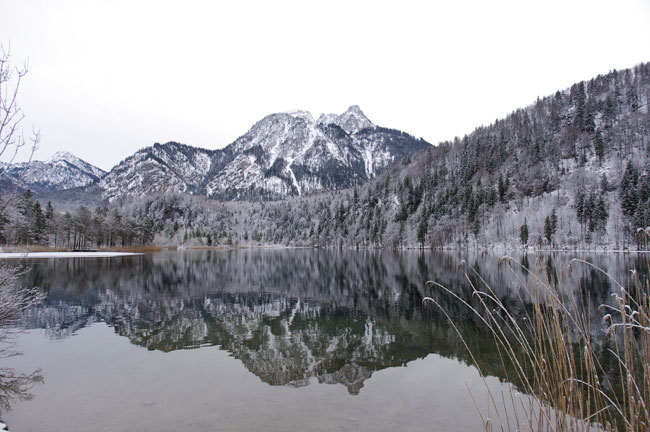