A few weeks ago, while I was catting around on the internet for information about Biggersdale Hole, I came across a mention of a waterfall near Goathland called Nelly Ayre Foss.

A former spa village, Goathland is perennially popular thanks to its alter ego as Aidensfield in blue-rinse classic, Heartbeat, and its railway station’s cameo as Hogsmeade in the Harry Potter films. In terms of waterfalls, it’s well known for the tumbling waters of Mallyan Spout, and to a lesser extent Thomason Foss in the charismatic little hamlet of Beck Hole. But I’d never heard of Nelly Ayre.

My mum was visiting last weekend, and with the sun shining, we set out on Sunday morning to see if we could track Nelly down. Our timing wasn’t brilliant, since the narrow lanes of the Esk Valley were choked with trippers hoping to get a photo of the legendary Flying Scotsman as it plied the North York Moors Railway for a few days. Not that you could blame anyone for wanting to take themselves somewhere pretty on such a glorious morning, and in fact the crowds were all clustered around the railway and the pubs, leaving the moors themselves fairly quiet.

Turns out Nelly Ayre Foss is not the most accessible of places, but in many ways that adds to its charm. I reckon the best way is to head south-west out of Goathland past the Mallyan Spout Hotel, then at the roundabout take the track that goes straight on (not the one up over the hill), skirting the edge of the moor parallel to Hunt House Road. Of course you could just take the road (in which case you would go right at the roundabout, then take the left fork at Hunt House Road, being careful not to go too far – if you pass Hunt House itself then you’ve overshot it), but it’s nice to get a bit of a view over towards Castle Hill and evocatively-named Murk Mire Moor. When you’re a short way past the road switchback and buildings at New Wath, you can then cut down to your right, crossing Hunt House Road and making for the wall of a sheepfold. It doesn’t much matter where you hit the wall, since you just turn left and follow it to its end, then turn the corner down towards the valley floor. By now you should be able to hear the foss (which, by the way, is a corruption of ‘force’, and is a pretty standard local term for a waterfall).

From there it’s a little bit of a scramble, with a steep bank to slither down whichever way you elect to come at it. A massive stick might help (or not). 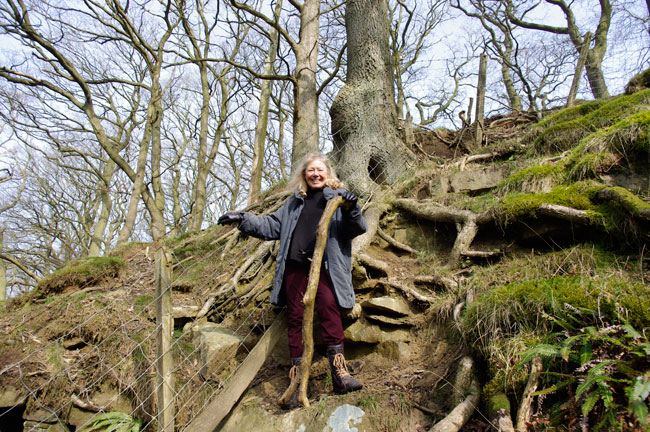 Your reward, however, is a thoroughly lovely spot – secluded, airy and beautiful. A relatively wide, gentle foss with good ledges for sitting and swinging your legs as you tackle a cup of coffee and a piece of shortbread. What’s especially nice is to compare an 1872 drawing of Nelly Ayre Foss by Edmund Marriner Gill (courtesy of the British Museum) to the pictures I took last weekend. The trees have grown a bit, and it looks like he had a bit more water coming over than we did, but in a changing world, Nelly Ayre is more or less as he left it 140 years ago. 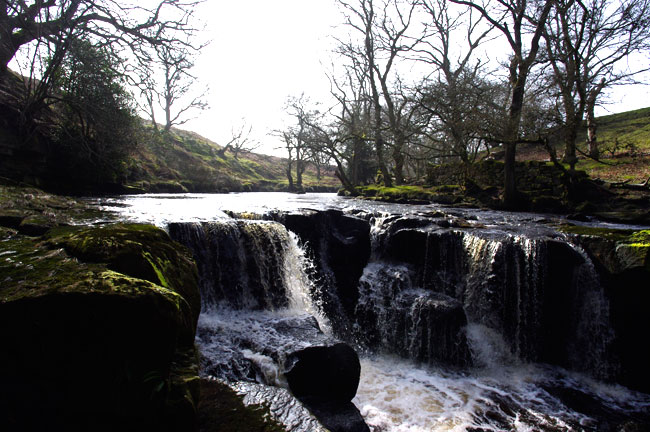 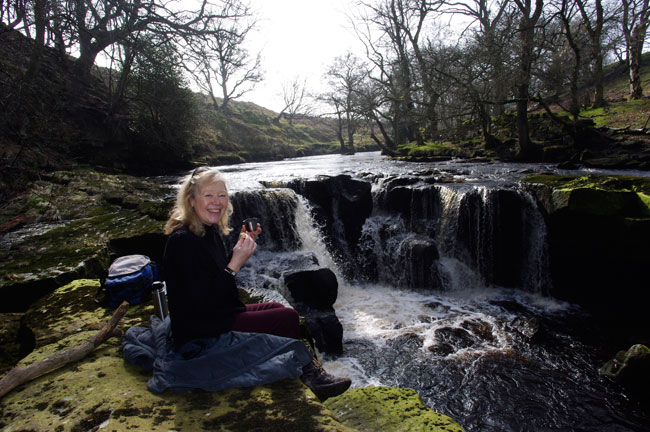 [Note: A good way to see the waterfalls round Goathland is to put together a circuit taking in Nelly Ayre, Mallyan Spout and Thomason Foss, with obligatory refreshments at the wonderful Birch Hall Inn. Be warned however that the beckside path between New Wath and Mallyan Spout is very eroded, to the point where it can be quite difficult going. The local authorities have provided an alternative path which runs a little higher up the side of the valley, and if you’re at all unsteady on your pins (or not wearing stout boots) then this might be a better option.]