[Edit, June 2020: There’s been a bit of interest in my Kielder blogs lately, so it’s worth pointing out that this one was written several years. Since then, some of the backpacker campsites I stayed at have closed (Needs Hill, for example). If you’re looking for practical information about wild camping in Kielder, your best bet is to email the Forestry England rangers at Kielder Castle.]

Well, yes, I suppose it is. But that’s doing Kielder Forest a bit of a disservice. Last month I took a long weekend to have a second nose around England’s largest man-made forest, following an earlier visit in October. I was feeling a bit beaten-down what with one thing and another, and there’s nothing gives you a lift like a few days slinking around somewhere unfamiliar with a map and a backpack. 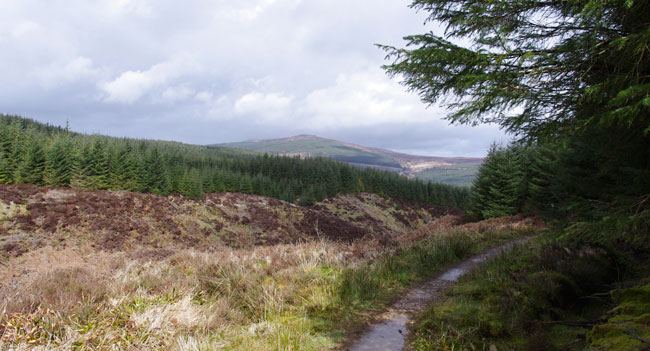 Secrets of the forest

Once again, Kielder didn’t disappoint. It’s just so full of interest. In the course of a single day I came across a giant decapitated wooden head hidden in the trees; relics of a long-gone railway track, including a towering, slightly eerie viaduct; a striking modern observatory high on a hill, and one of James Turrell’s famous Skyspaces, which for the uninitiated is a sort of oversized, upside-down celestial version of those underwater viewers you used to make out of plastic bottles. During a brief brush with other humans, I sat with mid-morning coffee in the caff at Kielder Castle, watching a live video feed of the recently-arrived migrant ospreys pulling strips of sushi off rainbow trout from the reservoir [they have a good blog, if you’re interested]. 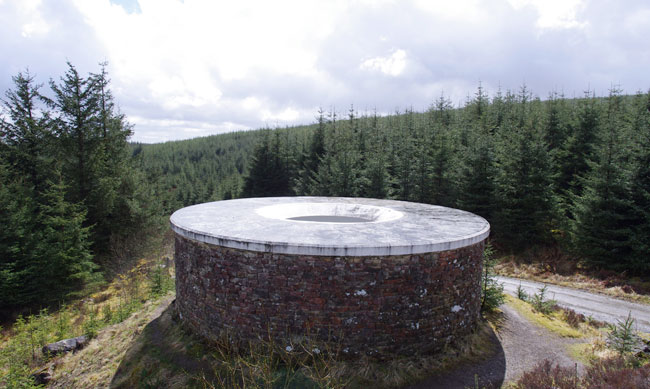 There are moorland hilltops hidden in the forest too, and since it’s access land (and you can thus wander more or less wherever you like), I indulged in a little afternoon yomp on a compass bearing across rough, trackless heather to the trig point at Purdom Pikes. There are plenty more tops around, including a couple of Marilyns that I quite like the look of. 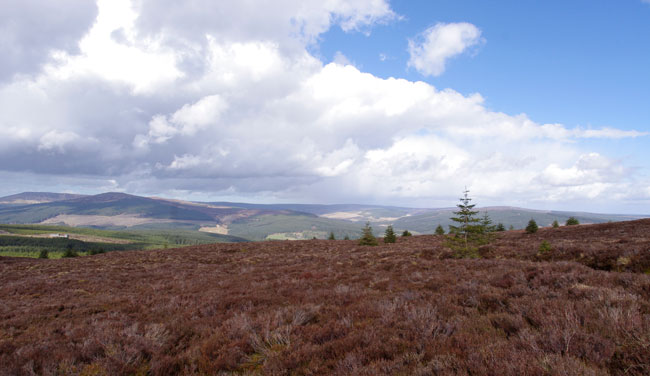 It’s a place where you get used to expecting the unexpected, and it is in the nature of a working forestry concern that your maps are out of date almost as soon as they’re printed. Wholesale felling can mean you get wide-reaching views when you were expecting to be hemmed in by lofty spruces, and the route you might have planned to take may well have been planted over.

Paths, tracks, and the sticky question of walking on bike trails

There is a downside to all this, in that the footpaths are frequently very ropey, if you can find them at all. The circuit round the reservoir is superb (and wheelchair-friendly, I believe), but otherwise your choice is often between sticking to the Forestry Commission vehicle tracks or toiling through clawing scrub, trees and bog with your compass out, occasionally reassured by a mouldering bridleway sign sticking wonkily out of the side of a tree. But you can’t have your cake and eat it, and in some ways it’s all part of the fun – you just have to enjoy the place for what it is. If you want to make quick progress, take the Forestry Commission tracks, and if you want an adventure, get your compass out and have a play in the woods. There are enough landmarks that it’s hard to get really lost.

In fact there’s a third option, but it’s a bit of a tricky call to make. You see, there’s actually an excellent network of tracks in Kielder Forest that most likely won’t appear on your map. They’re well-maintained, and access many beautiful and hard-to-reach areas of the forest. The snag is that they’re for mountain bikers, and have been lovingly built with a great deal of time and effort by volunteers from the Kielder Trail Reavers.

Of course you’re not going to do the trails any harm with your boots, and bikers use footpaths all the time, but equally part of the fun of downhill biking is being able to hoon down a track without slamming the brakes on to negotiate walkers. On bridleways I would take the view that bikers should expect to share the path (and indeed they do), but when they’ve gone to the considerable trouble of creating a network of purpose-built routes, I feel like they’ve probably earned the right to enjoy them freely. Mountain bikers are among the most likeable groups of outdoorsmen, and it would be a shame to interfere with their fun.

I was curious enough about the question that I emailed the forest rangers, and their response was eminently sensible. They say it’s access land, so you can go where you like, but they’d prefer walkers to avoid the bike tracks for safety reasons. According to the ranger I spoke to, ‘I think generally we would discourage pedestrians from walking on dedicated mountain bike singletrack trails, as riders may be moving at considerable speed and not expecting to encounter people on foot’.

I didn’t plan to use the bike trails, but I did occasionally explore them if they went the right way and there wasn’t any other way of getting there. I kept eyes and ears open, ready to get out of the way quickly, though in fact in the whole weekend I only saw two bikers (which probably says more about the extensive nature of the network than it does about the area’s popularity). Ultimately it’s your decision, but if you do decide to take the bike tracks, it’s worth making sure you respect the priority of the users for whom they were built.

A night in the woods

Another fine feather in Kielder’s cap is that it’s one of the few places in England where wild camping is permitted to some extent. There are twelve ‘backpacking sites’, on top of a few bothies that also lurk in the woods. It’s worth being absolutely clear that these are not ‘campsites’ with toilets and taps. They’re just little corners of forest, usually in pretty places, where you’re allowed to wild camp. There are streams nearby for water, but you’ll need to filter, sterilise or boil it. And if nature calls, you can slide off into the trees and commune with it directly.

One morning at Scotch Knowe (so called because it sits right on the border), after I’d taken the decision to wait out some persistent rain in the warmth of my tent, a passing ranger hollered over just to check I was ok. He said many of the sites were rarely used, and I think that’s a bit of a shame. True, some of them are boggy or difficult to find, but they’re there, and that’s the important thing. The forest covers a very large area, and having places to stay dotted around brings more of it within reach. You don’t have to get back to the car by the end of the day, and you can enjoy being deep in the heart of the forest at dusk and dawn. 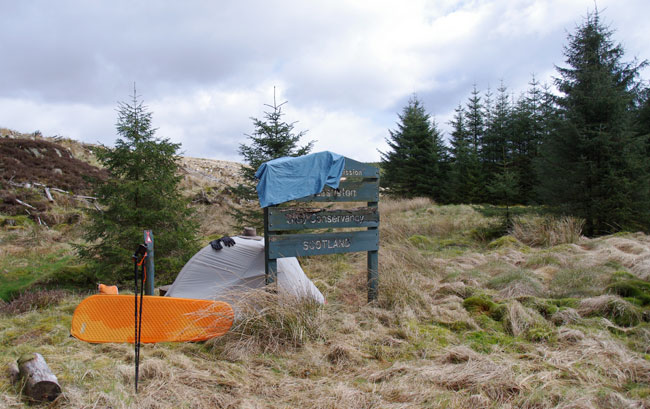 If you want to wild camp in Kielder, you’ll need to contact the Forestry Commission at Kielder Castle for a list of sites and locations, then you just have to give them a rough itinerary in advance (they mainly just want to make sure they don’t double-book the smaller, single-pitch sites). It’s easy and they’re very flexible. Oh, and if you’re only going to try one, make it Needs Hill, on the north side of the reservoir. It’s pretty magical. [Edit, June 2020: Needs Hill is now closed, along with some of the other sites. For the most up-to-date list, contact Forestry England at Kielder Castle.)

As a walker, you’re often used to being tolerated rather than welcomed, but in Kielder you get a very different feeling. The forest is full of things for you to find, spots for you to camp, and interesting routes for you to take. It’s all open access so you can roam wherever you like, and there are baited lures to hook in various tribes of outdoor enthusiasts, whether they be hikers, bikers, runners, twitchers, anglers, or stargazers. There are even tracks suitable for wheelchair users. They’re working very hard to make adventures in the outdoors more accessible and appealing for as wide a group of people as possible, and I think that’s something to be commended.

Kielder is a real playground, and I for one will definitely be back.