Among the ever-expanding collection of schemes scrawled into my notebook in the past year, one was to become better acquainted with the North Pennines. It’s an area that’s intrigued me for a while – on the few occasions when I’ve driven through it, I’ve been impressed by its size, ruggedness and emptiness, yet the far north of England often seems a little overlooked by the walking press, or perhaps just the walking public in general. People get that far and they either veer off west into the Lake District or keep heading up to Scotland. I’m guilty of it myself. 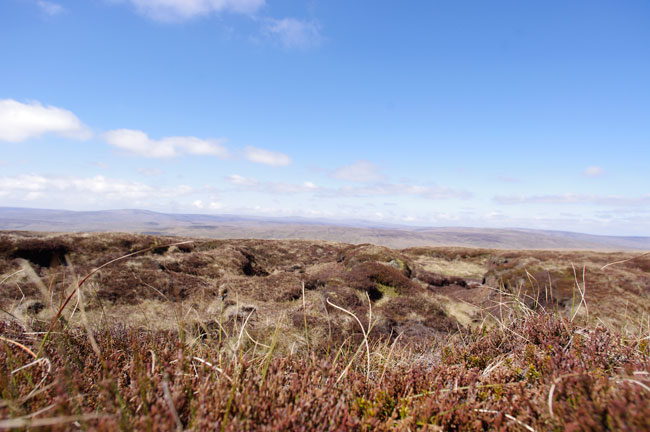 Unlike so many of my other disordered ambitions, I’ve lately been making a modest amount of progress on the Pennine plan. Christian and I have booked in dates to walk the Pennine Way in the summer, and last week I managed to carve out a few days for a quick trip up to Weardale. Motivations were twofold. Firstly, there was the simple desire to explore a new area (carefully picked to avoid anywhere we’ll be passing through on the Pennine Way), but the trip also formed part of my dog Charlie’s fierce training regime.

For anyone who has not encountered Charlie, I invite you to conjure up your own mental image of a sturdy, intrepid hill-dog striding with great dignity at its master’s side up hill and down dale. Now imagine the exact opposite, and you have Charlie. He is a five-year-old miniature poodle (distinctly on the small side even for his pint-sized breed), frequently totters around circus-style on his hind legs, and spends as much of his life as possible curled up like a tabby in any lap that will have him. A lady with a fat Labrador once described him as ‘a cat on a lead’, and his appearance is not made any more macho by the good collection of natty little coats that keep him warm in the cold weather.

All the same, I defy you to find a better companion for a walking Englishman. He will cheerfully trot upwards of 30km in a day without flagging, handles steep ascents with a good deal less trouble than I do, and sleeps beautifully in a tent. The Pennine Way will be Charlie’s first long-distance route, so the Weardale trip was an opportunity to get some more camping experience in, and to practice negotiating steeper, tougher terrain than the stuff we tend to come across in our rambles around the North York Moors. 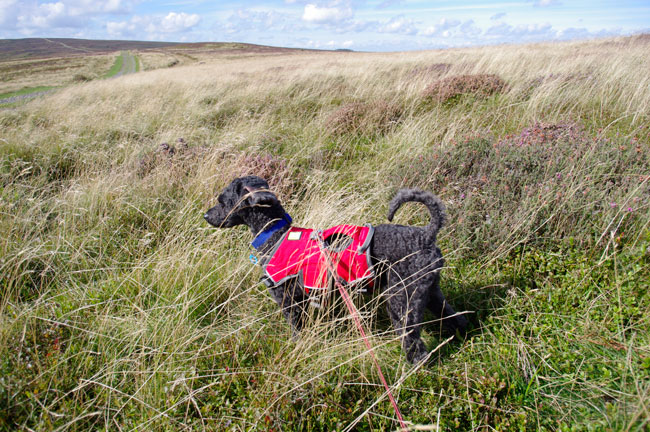 And it was a real pleasure. I stayed a couple of nights at a gorgeous, welcoming campsite called Pennine Lodge, complete with resident alpacas, a lush, sheltered camping field and a pretty waterfall. The further you drive up Weardale, the prettier and more timeless it becomes. Little one-street villages with pocket-sized pubs; fields full of sheep stretching steeply up the dalesides, criss-crossed by old, walled footpaths; tough stone farmhouses clinging to the high edges of the valley, and the high, peaty moors rolling away above.

Of course it was the last of these that I was most interested in. The campsite was just outside St John’s Chapel, and on one of my days I took in a walk from the Cicerone Guide to Walking in the North Pennines (by the prolific and ever-reliable Paddy Dillon), climbing up to Chapelfell Top. At a shade over 700 metres it was a decent pull up, and most of the route spanned trackless access land. It was a a clear, hot day with a cold wind, and in decent weather I love this kind of walking – working off compass bearings, taking your time, negotiating crumbling, cliff-like hags and deep, damp groughs in the peat. Slow progress but interesting and satisfying, with vast views opening up to the north and west. The dales disappear behind the slope of the fell and there’s no other bugger in sight. Part way up there’s a bench-shaped rock where Dillon reckons John Wesley might have paused to enjoy the view in the late 1700s. It’s a bit of a fanciful theory, but I hope he did. Because I did, and it was quite a sight.

Dillon’s route conveniently handrails off a fence line between Chapelfell Top and Noon Hill to the West, and as I picked my way through the groughs, I came across the front end of a skeletal sheep sticking out of the peat bog. The open access land of the North Pennines is a glorious place to be alive, but apparently not everyone makes it out that way. 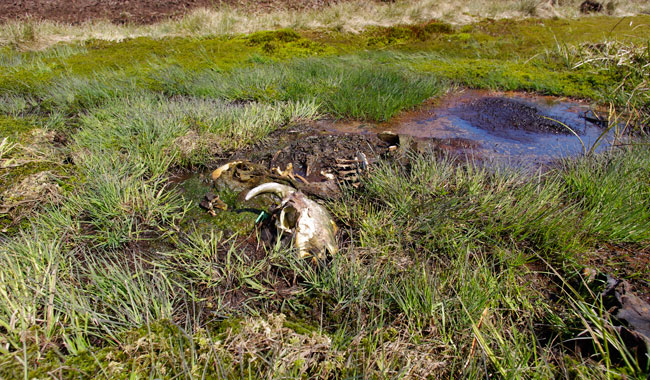 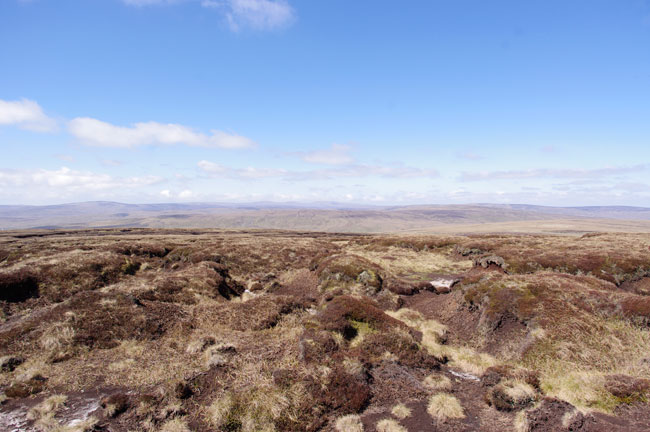 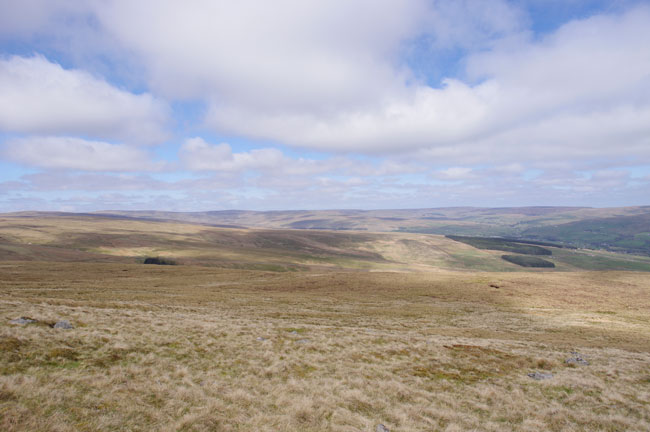