The other week, my brother turned thirty, and he celebrated with a street party outside his end-of-terrace house in Hebden Bridge.

It was a grand old occasion, with family and friends travelling from far and wide, and a warm crowd of neighbours out boozing and barbecuing in the sunshine. The only one openly displeased with the whole affair was Christian and Kate’s neurotic ginger cat, Rafferty, who spent the afternoon skulking like a reclusive feline Mrs Rochester in the attic, occasionally appearing in an upstairs window to gaze down on the street full of people with a mixture of alarm and disdain.

My own contribution to the event, apart from several hours of rambling drunken opinion, was a cask of bitter, produced more or less to the birthday boy’s specifications. The CAMRA accolades are still a very long way off, but considering it was the first time I’d ever cask-conditioned my brews, it didn’t turn out nearly as badly as it could have done (particularly since I was a little short on pale malt, and had to make up the starch content for the mash with a bowl of porridge oats). In an ideal world it would have had rather more time to settle after its long car journey, but two and a bit hours was just about as long as we could manage to keep away before opening up the tap and sampling it.

Most encouragingly, none of us felt too rotten the next morning, which I can confirm from painful experience is not always the case when tipping back booze concocted in a cottage kitchen. A success, then, albeit a modest one.

Anyway, for added authenticity, I scribbled up a label for the cask. In thirty years I have never tired of producing crude caricatures of my younger brother, and long may his absurdity continue. 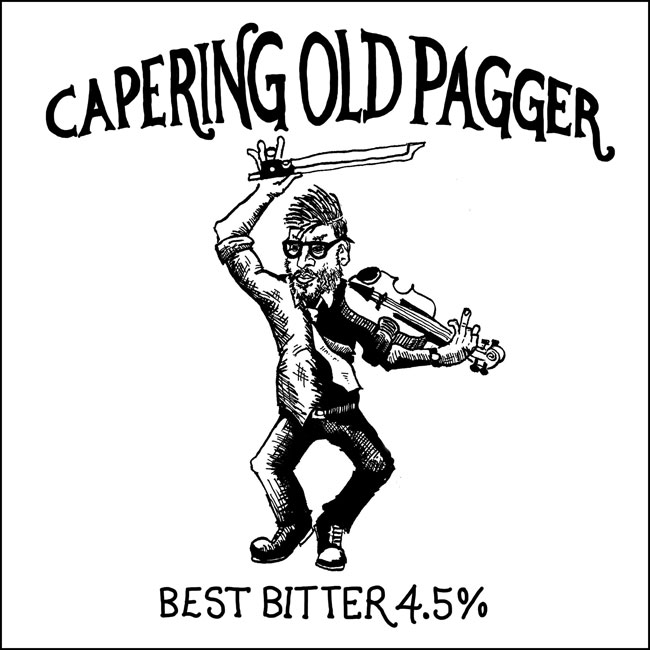