It’s becoming apparent that I am something of a Jonah when it comes to mountain trips. For the second summer in a row, my hiking companion has brought home a broken bone as a souvenir. Admittedly my brother’s paggered hand this time round was not nearly as catastrophic as Gustav’s arm last year, and you can’t fault his timing, breaking it as he did on our last morning of walking, but all the same, I shouldn’t imagine there’ll be many volunteers sticking their heads over the parapet next time I ask for some company on the trail.

Calamity aside, Christian and I have just got back from a thoroughly wonderful trip to Norway, visiting areas that were equally new to both of us, with a sneaky bit of R&R in Bergen in the middle. For this first blog, I’ll focus on the initial week in Jotunheimen, before tackling our time in Hardangervidda in a separate post.

Jotunheimen has a reputation as Norway’s flagship mountain realm, with a concentration of high peaks and glaciers pretty much unrivalled in northern Europe. It feels old, and grand, and powerful, and a little bit desolate. It’s not actually all that large, but the steepness of the terrain means you get good value out of your miles. 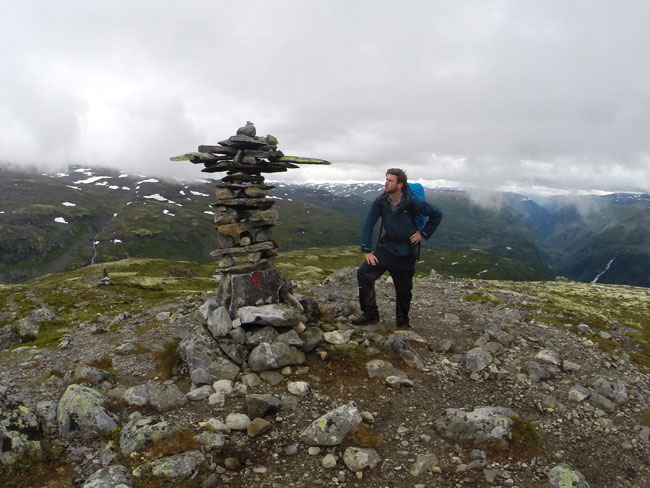 Christian and I tramped the classic east-west crossing, as set out in Connie Roos’s excellent Cicerone guide to Walking in Norway. According to my GPS, the route was about 110km, and took us five and a half days. We set out from the popular tourist station at Gjendesheim, scrambling along the Besseggen Ridge before descending to lake Russvattnet. Over the next ridge to the lodge at Glitterheim, then up Glittertind, which at 2,465m is Norway’s second highest mountain (and well over a thousand metres taller than Ben Nevis). Descending on the other side, we wound through valleys and passes, encountering three mountain lodges – Spiterstulen, Leirvassbu and Skogadalsbøen – before finally dropping down into the valley at Vetti, and picking up a bus back to the real world at Hjelle.

First, the good; and there was a great deal of it. I for one have never seen views like those in Jotunheimen, (and I have seen quite a lot of views at one time or another). The photo from the Besseggen ridge, showing the strikingly different-coloured lakes Gjende and Bessvattnet, must be the second most famous shot in Norway (I reckon star jumping on Trolltunga probably pips it to the top spot), and the scramble along the ridge is most exhilarating. Our guidebook writer reassured us that ‘the dangers of this ridge are often exaggerated’, but a quick google reveals that Connie Roos was tragically killed by a lightning strike in 1999 while working on a guide to the formidable GR20 in Corsica, so perhaps she may have been a bit edgier than your average upland bimbler. At any rate, with a big unwieldy backpack on, and drizzle greasing the rocks, the Besseggen scramble is enough to get your heart going nicely. 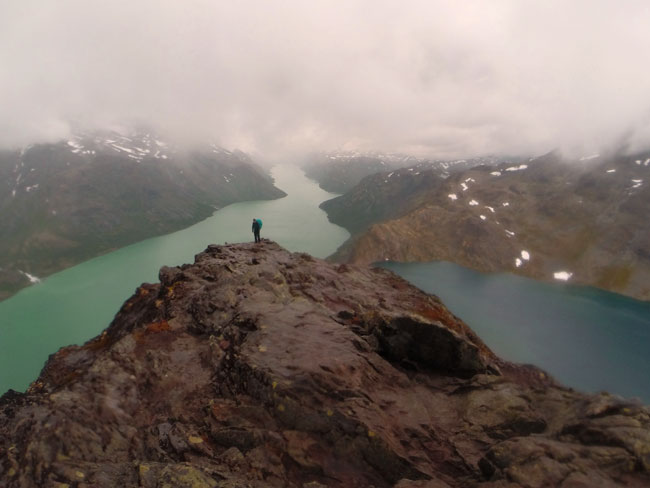 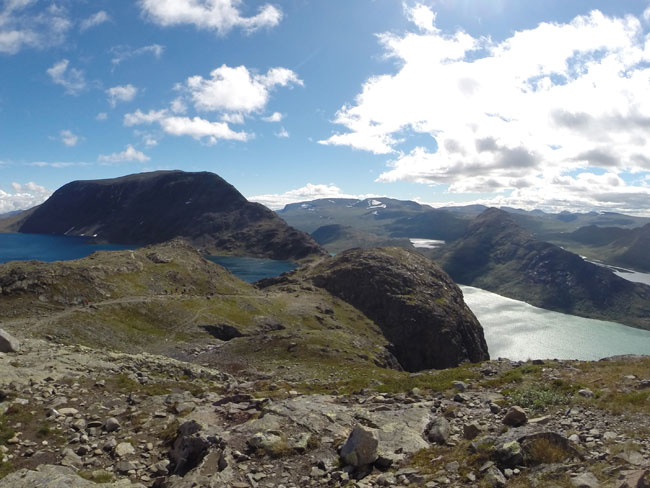 Each day had its own distinct character, and the joy of the route was how well these stages dovetailed. The ascent of Glittertind, for example, was punishing and rewarding in equal measure, with horizontal snow and biting winds as we crossed the eternal snowfields blanketing its top. It’s the kind of excitement these sorts of trips are all about, your jacket frosted with ice as you snatch glimpses of the tiny world below you through the swirling snow clouds, stopping only for the briefest of photos on the summit before making a dash down to comparative shelter. 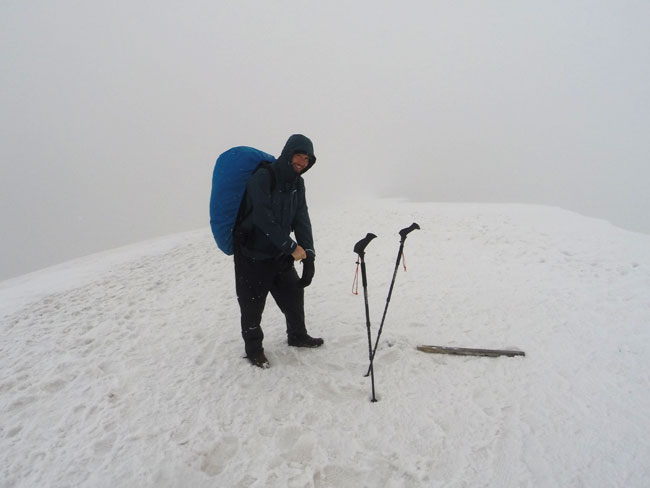 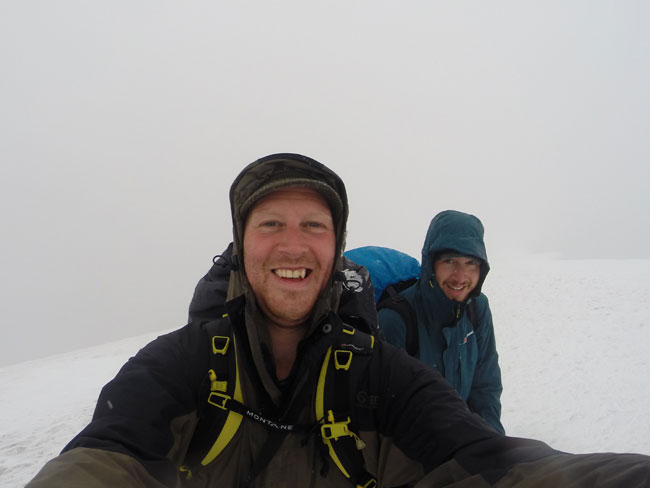 The next day, by comparison, was a long, gentle climb through the valley between Spiterstulen and Leirvassbu. Soft, comfortable walking where you could recuperate from the previous day’s exertions and dawdle as you enjoyed the views of mythological-looking peaks like Kyrkja – ‘the church steeple’ – the cloud flowing round its pointed summit cartoonishly, like dry ice.

The social side of the Norwegian mountains was a pleasure too, and nowhere was this more enjoyable than at Skogadalsbøen. Given that most of the other mountain lodges have road access (Leirvassbu and Gjendesheim even have regular bus services from Oslo via Fagernes), as a multi-day walker you can sometimes find yourself in the minority. This isn’t necessarily a bad thing – and we mostly camped out anyway rather than using the lodges – but it’s always fun to swap stories with folk having the same sorts of adventures you are, and you can feel a little self-conscious when everyone around you looks immaculate on account of their suitcase full of clothes, while your own idea of ‘scrubbing up’ is to wear sandals instead of boots and a t-shirt that only has two days of wear instead of four. There are no such concerns at Skogadalsbøen. Everyone has got there on their own two feet – usually via somewhere interesting – and in the evenings you sit at long, communal tables, filling up on hearty platefuls of roasted meat and fish as you trade tales with fellow pack ponies. Rather charmingly, there was a small delay in serving the main course on the rainy night we stayed in their lovely old bunkhouse, so one of the girls who worked in the kitchen came out and gave us all a little flute recital by way of apology. Not something you see every day.

There is only one downside to Jotunheimen, and it is the inevitable one, which is that the world and his wife are all there. Footfall is heavy on all the main trails, and the pervasive road access means you never really feel like you’re getting into the back country. That said, it was only Besseggen where the crowds were really noticeable, along with the inevitable detritus of thousands of humans – plastic packets weighted down under stones, half-buried beer cans, disintegrating bog roll plastering the rock around more or less any little nook hidden from the wind, and old sanitary towels billowing ethereally in the shallows of Bessvattnet. Away from Besseggen though, the people quickly thinned out and got friendlier, and as we pitched camp the next evening, a moustachioed shepherd stopped to pass the time of day. His equipment was bodged and patched, and we could see his old brown teepee in the distance down by the edge of Russvattnet. His English vocabulary was sparse, but on learning our nationality, he was in no doubt as to the correct way to proceed.

‘You watch football? I am a Manchester United fan…’ 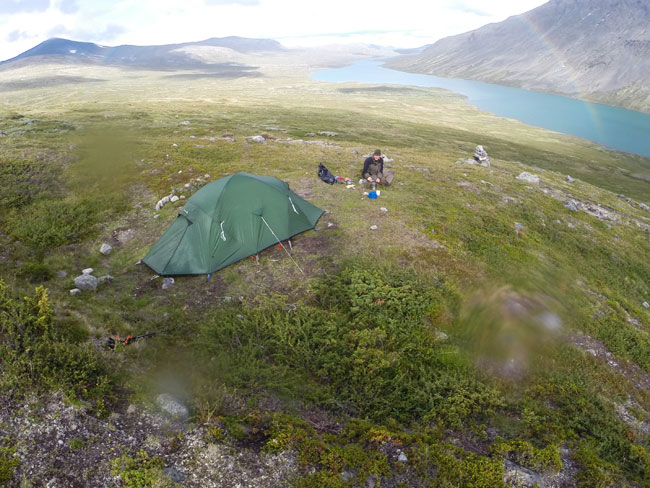