It’s rather wonderful to discover something new about somewhere you thought you knew back to front.

Less than a ten-minute walk from my cottage, Mulgrave Woods is an enchanting place – a 2000-acre ancient woodland with a ruined castle perched high on a hilltop in the middle. Part of the Marquess of Normanby’s estate, it’s managed for game and timber, but the public are allowed in at weekends and on Wednesdays. I’ve been going there my whole life, and as I stroll down the broad forest tracks, I sometimes pass trees that I used to clamber on when I was a boy, or dense, tangled rhododendron thickets where I once hid. I imagine they will still be there long after I’m gone.

Last week, while sorting out the bookshelves at the cottage, I uncovered a battered copy of the Ward Lock’s Red Guide to Whitby and the Yorkshire Coast. It’s a beauty, with some classic vintage advertisements and a rich, antiquarian smell. There’s no date on it, but from the ads and the fact that the Yorkshire coast still had a good train network, I reckon we’re looking at the early to mid 1950s. 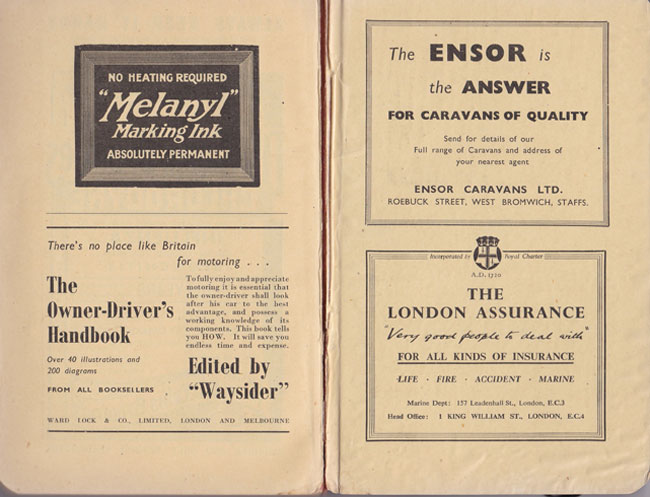 It’s the sort of book I could spend hours poring over, but inevitably I started by turning to the section on my own village (‘a neat village […] not much to show the visitor except its church’) and the adjoining woodlands. The old and new castles got a mention, of course, but I was intrigued by the following:

‘On the other side of the ravine, almost opposite the old Castle, is the Hermitage, really a small arbour or summerhouse of modern construction […] The Wizard’s Glen is reached by a pathway at the back of the Hermitage. A pretty waterfall will be seen here, and there are others in various parts of the grounds. Indeed, one can spend hours among the varied beauties of Mulgrave Woods.’

Hang on. The Wizard’s Glen? I got out my OS map (OL27 North York Moors Eastern Area), and sure enough, directly south of the old castle, on the other side of the ravine, was a steep-sided gully with a waterfall. Seeing that the waterfall was named ‘Biggersdale Hole’, a bell rang somewhere, and I remembered that there’s a local legend about ‘Jeanie of Biggersdale’, also known rather gallantly as ‘Jeanie the hag’. In some versions she’s a fairy who lives in a hollow under the waterfall, while in others she’s a witch, a sprite or a bogle, but the rough story is usually the same.

A fairly lengthy version of Jeanie’s tale can be found in Katharine Simpson’s 1893 book, Jeanie O’Biggersdale, alongside several other regional folk yarns. Jeanie’s particular saga runs to 52 pages, and is notable for undoubtedly the most Yorkshire opening to a book that I have ever read: 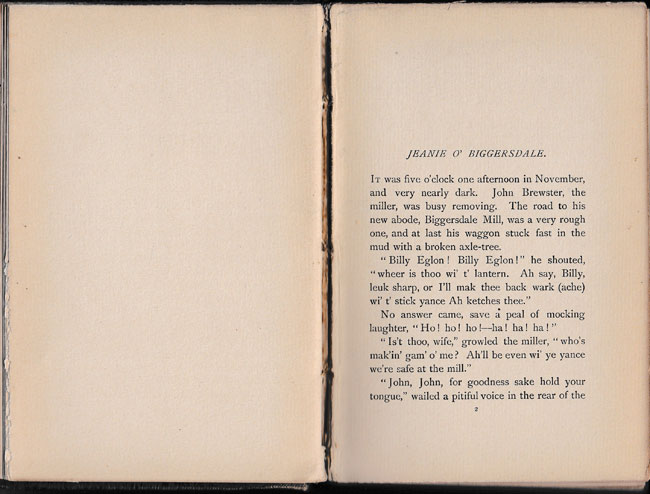 A rather more concise account of Jeanie’s misdeeds comes from Folklore of Yorkshire, by Kai Roberts:

‘An Eskdale farmer got more than he bargained for when he accepted a wager to enter Mulgrave Woods late one night and call out Jeanie of Biggersdale, an infamously ill-tempered fairy who lived at the head of that dell. Emboldened by alcohol, the farmer approached her dwelling and called her name; unfortunately for him, Jeanie was at home and at once replied that she was coming, her voice ripe with fury. The farmer turned heel and fled, with the irate fairy in hot pursuit. He managed to escape by crossing the running stream – a boundary which no denizen of the Otherworld can traverse – but Jeanie was so nearly upon him that she managed to snatch at the rear half of his horse before the animal was fully across, and her supernatural touch severed the animal in two.’

On Sunday lunchtime, after working the morning, I grabbed a flask and a handful of biscuits and set off to have a look. Of the hermitage I could find no sign, but walking west past the steps up to the old castle then zig-zagging down to the valley floor brought me to a bridge across East Row Beck, and the foot of Jeanie’s glen. 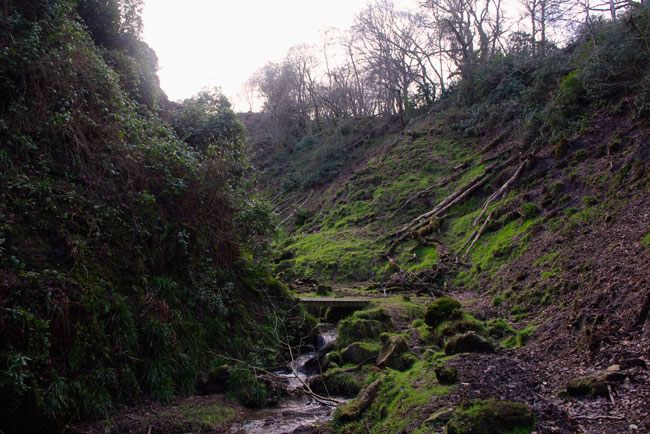 It’s safe to say the Wizard’s Glen is no longer a tourist spot. The bottom part was still used for shooting, as evidenced by the numbered wooden platforms across the stream, the spent shells glinting in the water and the occasional remnants of downed birds, but as I clambered further up the glen the pathway gave out. It grew steeper, darker, narrower and choked with brash and fallen trees, to the extent that the easiest way was often to scramble up through the water. Finally, turning a corner, I came upon the edge of the wood high above me, with the waterfall tumbling down into the dell from the fields beyond. Thankfully there was no sign of stroppy Jeanie, but it was a beautiful, wild spot, with the bright winter sunlight shining through the branches, and long tendrils of ivy hanging down from a fallen tree that bridged the ravine above. 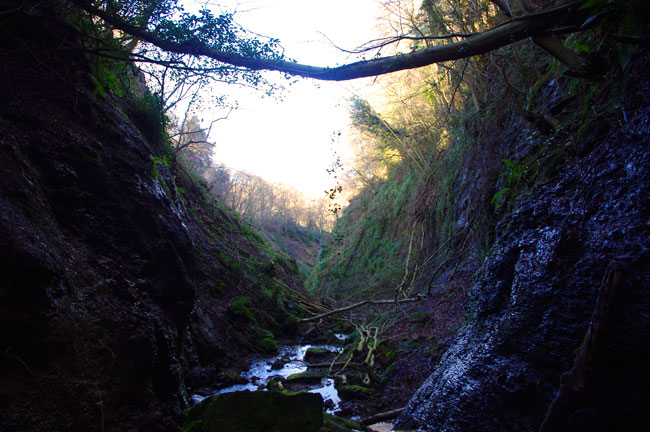 On my way back, I took a different route, crossing East Row Beck at a ford, and I was amused to see the prints of a horse’s hooves in the soft mud at the edge of the stream. Hopefully this one made it out alive. 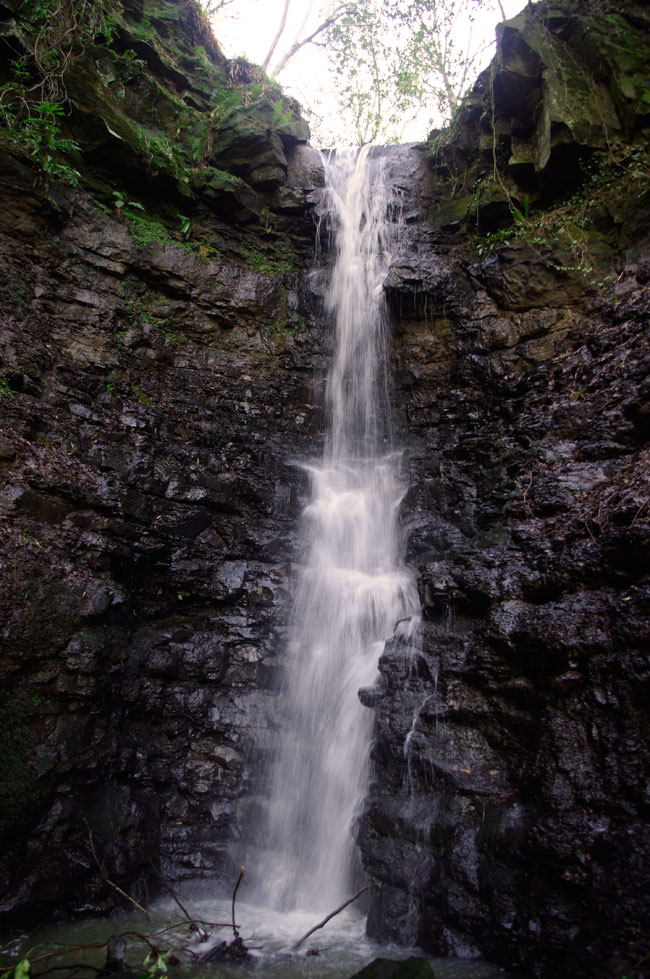