Yesterday, while rooting through an old chest in pursuit of lightbulbs, I unearthed a WW2 fireman’s hatchet.

It’s a Chillington ARPAX, and as axes go, it’s a bit of an oddity. The whole thing is made of one big lump of steel (including the shaft), and the handle is encased in thick black rubber, one side of which bears the ambitious claim ‘TESTED – 20,000 VOLTS’.

Our forebears loved their obscure acronyms and baffling hierarchies, and the ‘ARP’ in ‘ARPAX’ stands for ‘Air Raid Precautions’ – an organisation created in the 1920s that later became part of the Civil Defence Service during the Second World War. As far as I can tell, members of the Auxiliary Fire Service (AFS) and later the National Fire Service (NFS), wore these axes in leather holsters on their belts, and a variant was installed as a cockpit crash axe in RAF aircraft. The idea of the rubber handle was that, in the carnage following an air raid, you didn’t need to worry about hacking into live electrical cables. Still not sure I’d feel confident smacking one into a 20,000-volt power line, but there you go.

Anyway, the one I found was blunt, rusty and generally ill-used, but basically sound. At some stage someone had sawn the hook off the back of the head, no doubt reducing its efficacy for firefighting work, but making it much more serviceable as a household tool. So I spent a happy hour or so returning it to usefulness. 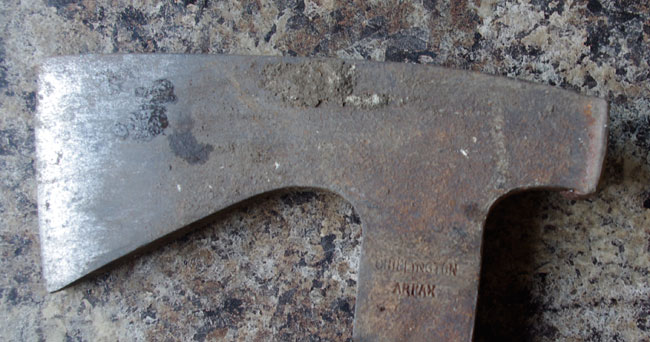 I started by scouring off the rust with a wire brush, followed by a good scrub with coarse wet and dry paper. Since I’m going to use it as a tool rather than an exhibition piece, I didn’t worry about getting it gleaming, just cleaned it up. Next job was to stick it in a vice and get to work with a file. I started by rubbing all the notches out of the blade, and regrinding it where necessary (the top part, or toe, of the blade was in rough shape, presumably as a result of hacking at roots or similar). After that, I turned it over and had a go at the other end, where the hook had been sawn off to create a rudimentary poll. This had been hammered with a sledge at some point, and there was some mushrooming, but with a bit of work I got it all smoothed off. Last job was to go over the bevel face and poll with various grades of wet and dry paper to get the worst of the scratches from my file out. It now looks much cleaner, and works a treat. 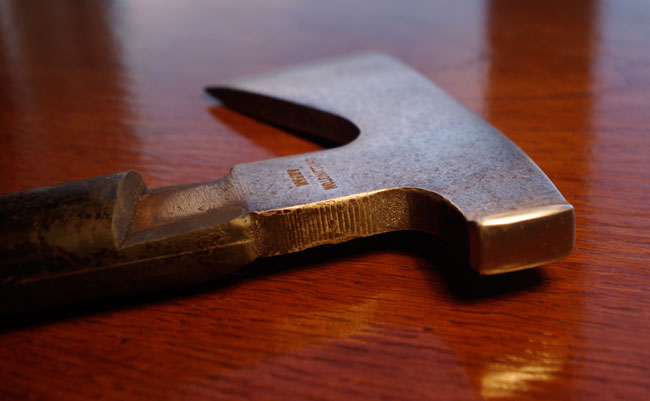 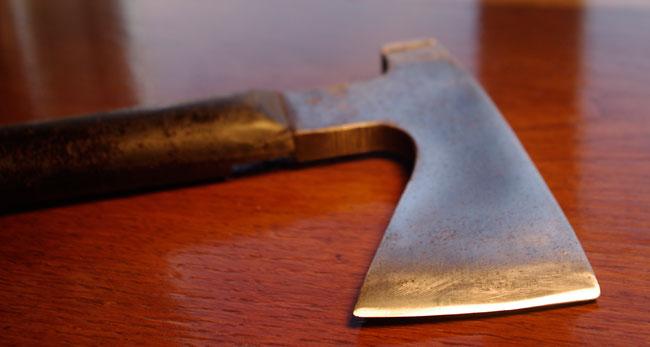 I’d love to know where it came from. As far as I know, no-one in my family has ever worked for the fire service (I came close last year, but failed on account of my eyesight). I suppose it might not even be a wartime relic, since I’ve no idea how long Chillington went on manufacturing these after the war. Believe it or not, the company still exists in the West Midlands, but when I emailed them to check, a very obliging lady informed me apologetically that everyone who worked on the axes is long retired.

I do have one theory, since stripping the rust away exposed the letters ‘F’, ‘W’ and ‘C’ stamped wonkily into the back of the blade. Seems like some sort of inscrutable official designation, and I wonder if ‘FW’ stands for ‘fire watcher’, those lonely souls who sat on top of tall buildings looking out for incendiary bombs. If it does, then my father used to run a factory in south Leeds which had a rather fine vantage point on top (the MOD put a machine gun up there at one stage). He could be something of a magpie, with a Yorkshireman’s reluctance to buy new stuff when old stuff would do, and it would have been just like him to pilfer an old hatchet from among the century’s worth of junk piled up in the factory lofts. Pure speculation, of course, and I’m probably way off the mark. 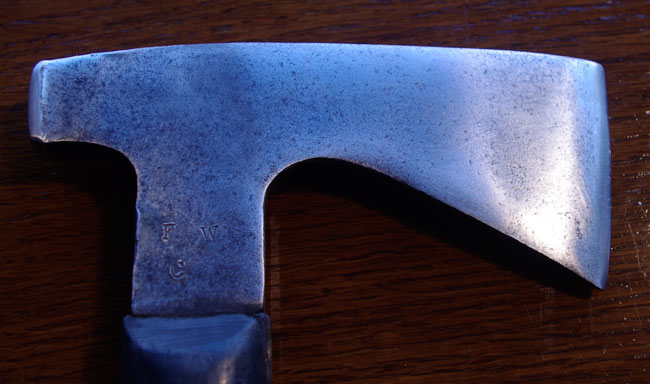 If anyone with any specialist knowledge happens to stumble across this post then please do leave a comment – I’d love to hear from you. In the meantime this old thing has been pressed back into service chipping kindling. From putting out fires to starting them.