Pheasant shooting finished at the beginning of February, and with the closing weeks of the season came a frenzy of activity across North Yorkshire, as fieldsports enthusiasts took every opportunity to blast as many of the buggers out of the sky as possible.

Chatting to a neighbour one morning, I asked him whether he was allowed to keep all the birds he shot.

True to his word, he turned up on the Monday morning with a generous gift of a brace of plump hedge chickens, tied together at the necks with blue twine. Rarely have I felt so keenly aware of my suburban upbringing.

Over the years I’ve dealt with fish, bunnies, and even a wood pigeon once, but pheasants were uncharted territory. The internet, and even the advice received from friends and family, was reasonably conflicting (it seems there is more than one way to skin a cat – or a pheasant), so for what it’s worth, here are the things I learned from my first brace of birds.

1. The flavour genuinely does seem to get stronger with hanging, even for just a few days. I ate the first one (the hen) after two days, leaving the cock bird strung up in the porch for five, and the difference in taste was noticeable (though it may have been an older bird, of course). Interestingly, the innards I pulled out of the second one didn’t seem noticeably more decomposed than those of the first.

2. I wished I’d checked the pheasants over more carefully when I first got them. Though superficially in similar condition, in fact the hen bird was almost unscathed (‘Must have been one of mine,’ remarked my neighbour, ‘shot clean through the head’), and it was beautiful plucked and pot-roasted with bacon, apples and cream. The gentleman bird, on the other hand, appeared to have been caught in a Butch and Sundance-style blaze of crossfire then plummeted from a great height (possibly onto tarmac). I ended up skinning him, removing the breast meat and boning out the legs. Once I’d cut off the bad bits and picked out buckets of lead shot and bone fragments, he made a grand stir-fry with mushrooms and Marsala (with enough meat left over for savoury pancakes later in the week). Had I done a better job of looking them over, I’d have eaten the shot-up one first, and left the roasting bird to develop a fuller flavour.

3. All kinds of helpful people swear by scalding or steaming to make plucking easier. I’ve no doubt that this works, but actually I found it was no bother to get the feathers off without doing any of this. It might be different for a very fresh one. I was also introduced to an exciting field-dressing technique whereby you stand on the wings and pull on the legs. It sounds like a certain way to explode a dead bird all over yourself, but apparently it is a very quick and convenient way to get the breast meat off. Again, I didn’t try it this time. Given that I was in no hurry, it seemed a shame not to use as much of the birds as possible (including boiling up the carcasses for stock).

4. The meat wasn’t nearly as lean as I remembered, and it certainly didn’t dry out with cooking. Could just be my memory, of course, but given that it’s probably 15 years since I last had one, I wonder if there have been changes to the way they’re reared/fed?

Anyway, it was an interesting experience, and the birds made delicious eating. Apart from anything else, as a carnivore you can sometimes feel a disconnect between what’s on your plate and the animal it came from, and you’re bound to savour the food more when you’re that bit closer to it. 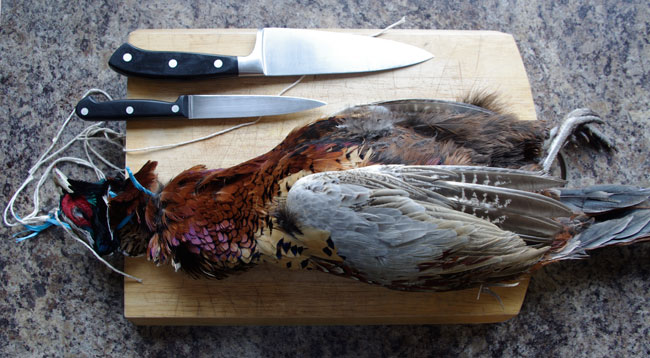 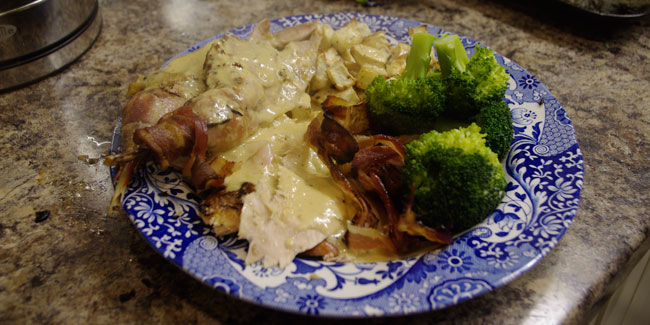