I know coffee table books are mainly supposed to be decorative objects that make you look clever when people come round, but I happen to disagree.

Coffee table books are to entertain you while you sit for a few quiet minutes taking a break. For those times when you don’t have the focus for a novel or the stamina for the telly, but a big, pretty picture book without too many words is just the ticket.

The size of my cottage and my aversion to clutter mean that most of mine are languishing in storage, but here are the three that currently sit by my armchair.

(The pictures aren’t mine to reproduce, so I’ve resisted the temptation to upload scans, but I’ve included some links.)

My mate Matt worked on this one, and sent me a copy because he knew how much I’d enjoy it. Big, striking portraits of people connected with the polar world, from greats of the golden age like Amundsen, Scott, and Shackleton, through to adventurers of today like Ranulph Fiennes and Pen Hadow. But it’s not just the big names. There are pictures of lesser-known crewmen on the great expeditions, mechanics and scientists working on modern-day polar stations, anonymous Inuits and Russians, even a London popcorn seller in a fur hood. It captures just a sniff of the polar spirit – the toughness and madness of the people who live in, or are drawn to, these far reaches of the earth.

I always like those slideshows that sometimes pop up on Facebook, entitled something along the lines of ‘abandoned wonders of the world’ or ‘stunning photos of urban decay’. There’s something haunting and emotionally ambiguous about the decomposition of human creations, especially buildings that were once places of happiness. A feeling of lost dreams and the vulnerability of ambition. Julia Solis spent years hunting out ruined theatres and cinemas, all too aware of the mix of nostalgia and sentimentality that such places evoke. I especially like the fact that, aside from a small number of case studies, she doesn’t put any text with her pictures. She reasons quite rightly that your feelings towards an image would be influenced if you knew it was in a hospital, or a school, a prison or an army base. She lets the images prompt their own reactions, and they’re strong enough that it works. Friezes crumble, backdrops and curtains fall to ribbons, and greenery grows up through the seats.

Have a look at some of the photos here.

Ludwigson lived three months in 1985 alongside the stockmen of Australia’s Northern Territories – the ringers, bullcatchers and jackaroos who toiled in a world of heat, flies, outdoor swags and ubiquitous red dust for pretty much minimum wage. There’s no cowboy glamour here, but the realities of bloodied hands and horns, ragged clothes and rough living. And it’s oddly beautiful, as Ludwigson brings out the warm colours in contrast to the bleakness of the land and the life. What’s striking is the youth of many of the stockmen and women. The first time you read it through, you imagine them as gnarly country kids, but the list of captions at the back reveals that many of them are from the big cities. The whole work is suffused with a sort of raw romanticism and I love it.

Have a look at some of the photos here. 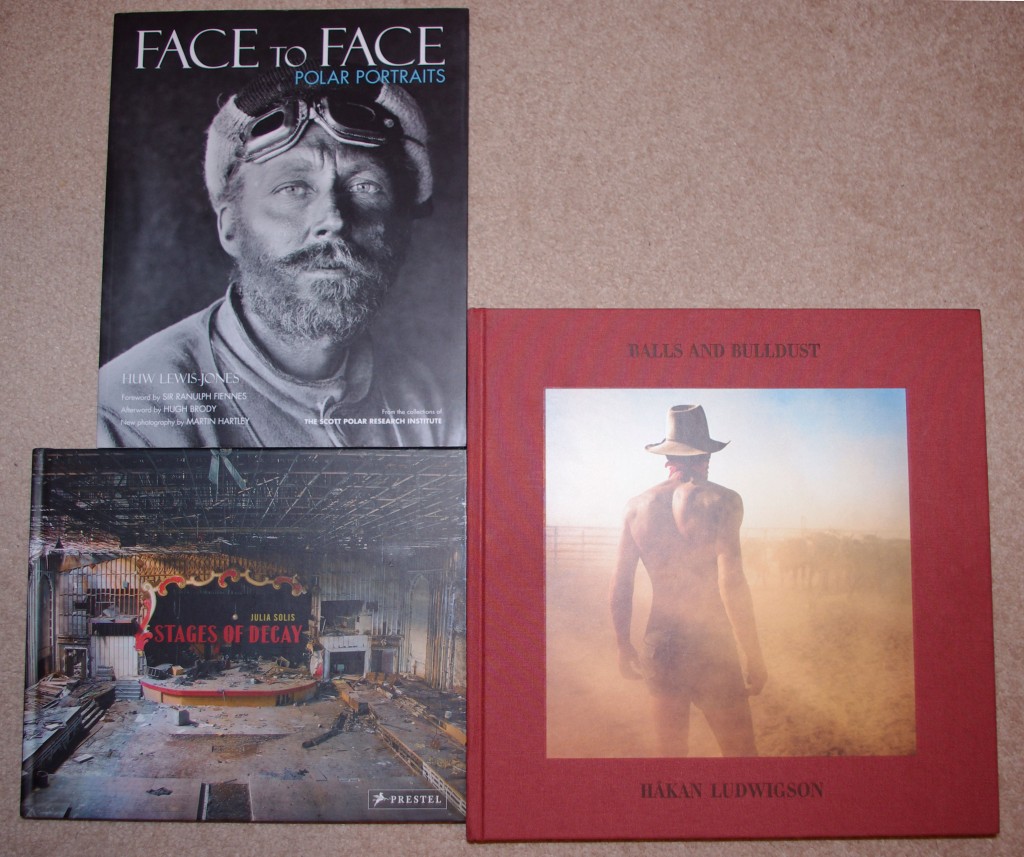 *Tough as old boots, indefatigable and heroically brave, Crean is one of my favourite polar adventurers. A giant Irishman who served with both Shackleton and Scott, he’s most famous for a last ditch stand to save his friend Teddy Evans, dragging him 100km on a sled (with the help of William Lashly), then hiking nearly 60km alone through the Antarctic with almost no food or equipment to get help. When he eventually retired to run a pub back home in Ireland, he allegedly put his medals in a box and rarely spoke of his incredible adventures. The photo is classic Hurley – evocative and rugged – and there’s an excellent quote from Tryggve Gran. ‘[Crean] wouldn’t have cared if he’d got to the Pole and God Almighty was standing there, or the Devil.’