A while ago, as I was wandering in the grounds of St Oswald’s church in Lythe, I came across an unusual grave. It was reasonably smart and clean – the stone looking distinctly younger than the dates on it – and bore the following inscription: 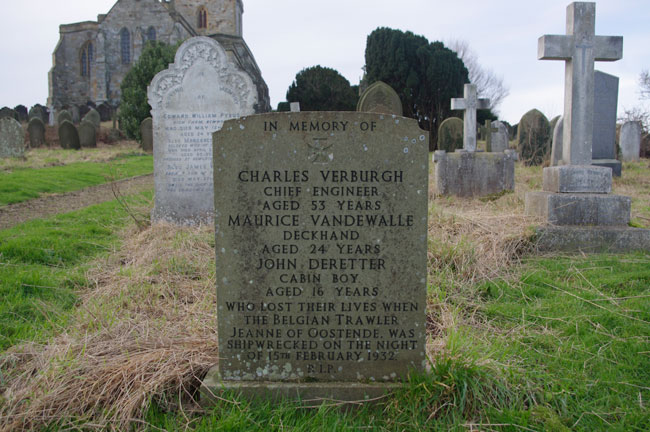 My curiosity was piqued. It sounded like a dramatic and tragic story, and I wondered why they’d been buried in that particular spot, and by who. Stories of wrecks and rescues abound along the Yorkshire coast, but I’d never heard of this one.

I had a scratch around online, but there was nothing there, save a photo of the grave posted by a lady on an ancestry website asking the same questions. I looked at some directories of wrecks in the area, but I couldn’t find any reference to a boat called the Jeanne, or anything similar.

So I dropped an enquiry to the Whitby Literary and Philosophical Society, which runs the library at the Whitby Museum in Pannett Park, and a couple of days later I had a reply from a very helpful lady called Barbara:

I have found a reference to ‘Jeanne’ of Oostende in ‘Shipwrecks of the Yorkshire coast’ by Arthur Godfrey & Peter Lassey, Dalesman 1974.

It reads, ‘… it was not until 16 February 1932 that any further loss of life occurred. The trawler JEANNE of Oostend, homeward bound with a rich haul of fish, ran aground at Kelder Steel 1 ½ miles south of Kettleness at midnight on 15 February. The Runswick lifeboat HESTER ROTHSCHILD was launched in a heavy sea and in thick fog, and with considerable difficulty located the wreck and came alongside, only to find the vessel abandoned. In the light of the flares, men were seen at the foot of the cliffs, and in these circumstances the lifeboat returned to its station and alerted the shore parties.

‘After a 4 ½ mile scramble over the rocks the searchers found the survivors of the 14-man crew in a pitiful state, scantily clad and suffering from exposure. Three had been drowned in the escape from the trawler in their small ship’s boat which had left only minutes before the arrival of the lifeboat, and which had capsized, hurling them into the sea. The eleven survivors were assisted up the cliff by the Kettleness Life Saving Rocket Brigade. The prompt action of the lifeboat coxswain in alerting a search party undoubtedly saved the lives of the crew who reached shore.’

Later on, I found the Jeanne mentioned in Jeff Morris’s book, The Story of the Staithes and Runswick Lifeboats. The tale as he tells it is much the same, but it adds a few more details. Not only did the worn-out lifeboat crew join the shore party on the punishing foot mission from Runswick Bay, but it was also the the penultimate launch for the Hester Rothschild, which went out 31 times and saved 114 lives over a career spanning nearly 22 years (including a couple of stricken steamers torpedoed during the First World War).

When the opportunity arose, I found my way down to Kelder Steel, or Keldhowe Steel as it appears on the OS map. It’s a towering jut of rock that sticks out along the sheer coastline between popular Sandsend beach and the wild headland at Kettleness, with its rugged, gorse-covered landscape of abandoned quarries and mysterious, bricked-up tunnels. 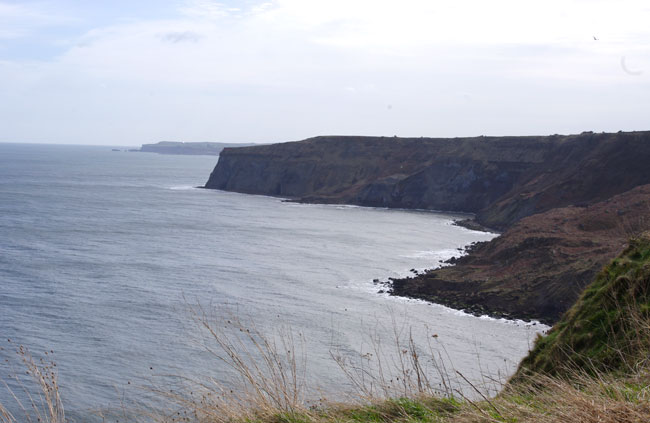 The Cleveland Way long-distance hiking trail follows the fields along the cliff edge south from Kettleness, and walkers along the route get a good view of Keldhowe Steel itself, along with the treacherous coastal scramble that the rescuers from Kettleness village and the nearby farms must have had to make in their search for the eleven survivors. Not only that, but the path also passes an odd, weathered metal post which I’ve been told was once used by these same men of the Kettleness Life Saving Rocket Brigade, forerunners of the modern Coastguard. [Update – discussion in the comments suggests that the post pictured is actually the support for an older coastguard hut.] 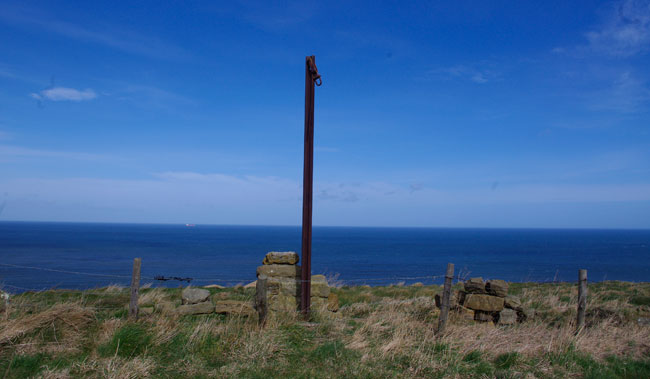 As you come along the old railway track towards the peculiar moonscape of Sandsend Ness, there’s a long and easily-missed flight of steps leading down from the cliffs to the shore at a place called Deepgrove Wyke (I think the sea anglers call it ‘the goat track’). You end up just near the foot of Keldhowe Steel, on a secluded, fossil-strewn shale beach below mudstone cliffs that sag like rotted old timbers. It was a glorious, sunny day when I went in search of it, and this stretch of coast is one of my very favourite parts of the world, but I can only imagine what it must have been like in the middle of the night in a filthy storm over eighty years ago, clinging on at the bottom of those steep cliffs in heavy fog and big seas. The reef is shallow and sharp a long way out, and it must have been this that snagged the Jeanne. 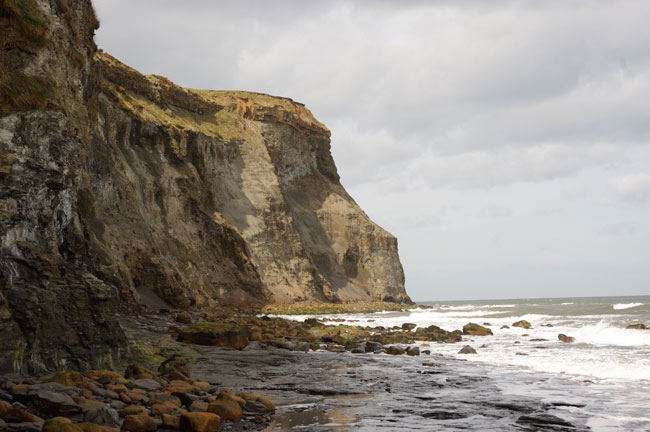 The Whitby area does a fine line in heroic tales of sea rescues, of which those of the Rohilla and the Visitor are among the most famous, but even near-forgotten episodes like that of the Jeanne are pretty remarkable. It’s a sad thought that three of the unlucky trawler’s crew finished up in Lythe churchyard, but I wonder how many people are alive in Belgium today because their grandfathers or great-grandfathers were saved by a bunch of strangers who set out on a stormy night in 1932.

Morris’s book mentions that the owners of the Jeanne presented Coxswain Robert Patton with an inscribed watch by way of thanks. Patton himself was killed two years later (in an impossibly brave episode of self-sacrifice that saw him posthumously awarded the RNLI’s Gold Medal for conspicuous gallantry), but it’s an intriguing thought that, besides the gravestone, a second relic of the rescue perhaps exists at the bottom of a drawer somewhere. 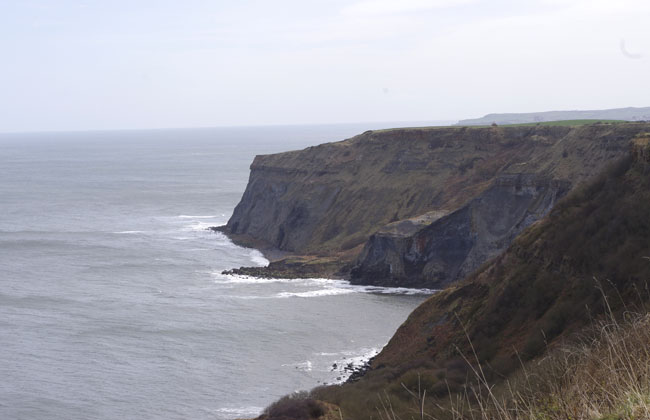