Opportunities to dress like a gentleman are few and far between in this modern age. While I like to introduce a little ornamentation to my daily wardrobe now and then, mainly in the form of waistcoats, nice suits, ties, hats and tweed jackets, there’s a fine line between looking good and looking like a cartoon.

On Saturday night I went to the Grand Anarcho-Dandyist Ball, where tipping over that invisible edge into vaudeville is more or less the point. Fellows in vintage army and navy uniforms rubbed shoulders with others in high collars and lined capes; handlebars bristled under homburgs; monocles and round tortoiseshell specs twinkled, and whatever I say about the girls it will just make me sound lecherous, but I’m sure you get the idea. My friend T wore a suit covered in LED lights, which made him a convenient landmark for the evening.

I used the ball as a sly and frivolous opportunity to buy a new bow tie. I love bow ties. Like hats, I dearly wish we still lived in an age in which they were standard (I’d love to wear a day bow to the office), but even for me they are usually a step too far. For Saturday, I got my new one from Peckham Rye, who make snappy ties of all sorts, cut to look especially nice hand-tied. Because as in many aspects of life, imperfection is important.

I have also got a bit slack about shaving lately, and while I was tidying myself up on Saturday afternoon, I was doing that thing where you remove the stubble bit by bit to reveal a series of alternately excellent and comical looks, much like the delicate work of chiselling a statue from a block of marble. (All fellows with imagination do this, just as they make shampoo Mohawks in the shower.)  I ended up with a pencil moustache, which I decided looked tremendously dashing, and I kept for the night.

In a terrible display of cowardice, I removed it before leaving the house the next day, but just for an evening I felt a bit like David Niven. 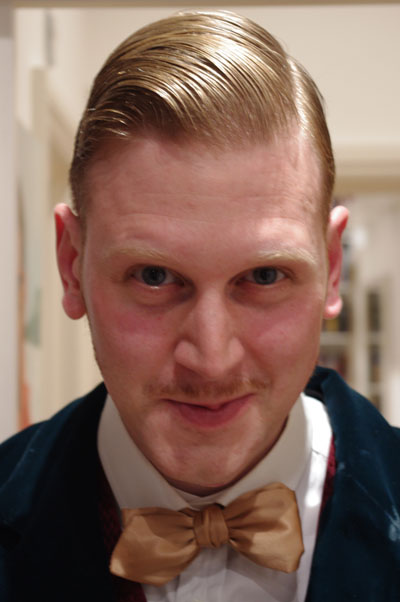