For a man with a brain not remotely mathematical, I always liked coded messages, and still enjoy trying to do those codewords in housewives’ puzzle books where you can send the completed page in to win a reading lamp or a nice but not excessive cash prize. In moments of extreme boredom or creativity I also occasionally send cryptic letters to my friends from made-up people, with pinprick marks above the letters revealing the true message. Since no-one has ever mentioned these, I presume they have generally been mistaken for an unusual form of junk mail and disposed of.

When I was younger, one of my spy books had a section on hidden writing, containing tricks such as writing in juice with a matchstick (revealed by baking the paper), writing with a candle (revealed by rubbing it with ash, I think), and some highly toxic-looking recipe for a special ink that would enable you to write on an eggshell and have the message appear on the white.

One method of ‘secret’ spy writing was to scrawl on a banana with a pin. Presumably you then have to pass the tattooed banana on to your fellow agent pretty sharpish before the message becomes visible, and also nowhere was it explained how passing someone a banana is any less suspicious than passing them a brown envelope.

This self-defining fruit revealed itself within about a minute and a half, which I suppose means you should take the pin with you to the park, and do the writing bit as your courier approaches. Subtly. 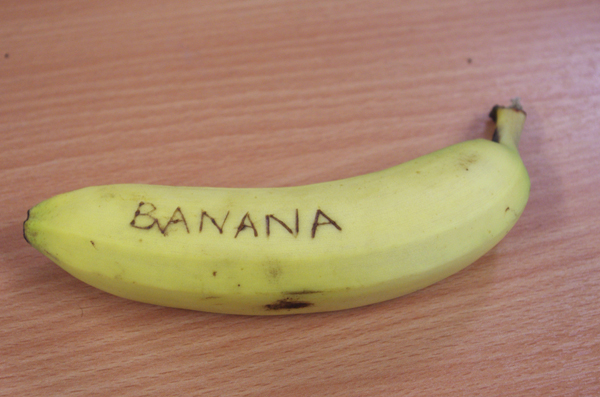