Up on the North York Moors, there is a particularly exposed stretch of main road running between the derelict Legendary Saltersgate Inn and the truck-slaying gradient of Blue Bank. As you come along it, past the US Air Force’s early warning station, a dull grey block that replaced the previous peculiar array of giant golf balls some time during the 90s, you get your first glimpse of the North Sea and the lights of Whitby in the distance.

You also see a small, wind-battered Christmas tree, decorated all year round, clinging to its foothold at the roadside, its grubby tinsel and bleached baubles flailing around in the icy wind. Its weathered cheeriness, come rain, shine, sun or snow is enough to raise a small smile. Or at least it was, until some vagabond came along in late 2011 and cut it down.

This did not go unnoticed. Locals commented and muttered. There were letters to the Whitby Gazette, including this rather poetic one. A little later in the year, my mum was driving across the moors when she spotted an old couple out on the windy roadside bedecking a new tree, evidently freshly planted at a jaunty angle.

Now there are three or four, which, though ridiculous, is rather lovely. For every action there is a reaction, especially in Yorkshire. 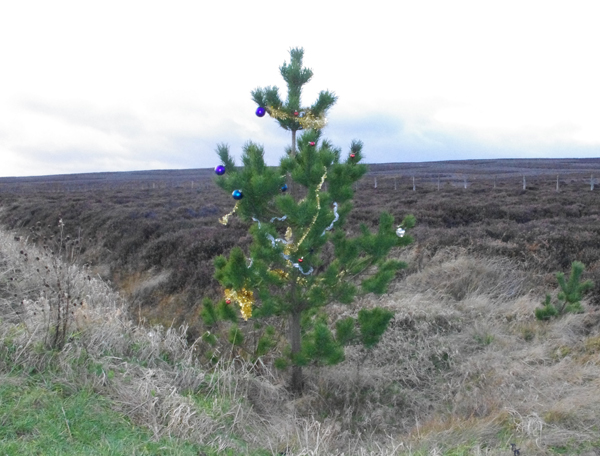