The best thing about setting out for a walk is that you just never know what the day ahead will bring. Of course you can know your route, and how you’ll get there, and who you’re going with, but there’s no need to plan in too much detail. And even if do, you’re still sure to stumble across something unexpected.

On Saturday, I took advantage of my only free weekend in August to get out of the city and stroll from Oxted to Otford with my mate T. Despite the route rarely straying more than a couple of miles from the M25, the fields and woods were glorious in the sunshine, the pineapple weed smelled sweet underfoot, and there were dazzling views across green rolling hills. At one point we tramped across the corner of a stubbly field edged with clusters of daisies, releasing clouds of brownish-red butterflies, while later in the day, heading up a slip road, we passed a verge of wildflowers swarming with sleepy, benign bumblebees.

Of course, such lovely days usually have a low point. The trouble with rural Kent is that it is filled with the cartoonish residences of the super-rich, and all the unpleasantness that goes with them. High perimeter fences are topped with razor wire, CCTV cameras leer down at you, aggressive signs warn off all callers, and big dogs slam against the fences, barking and gnashing their teeth hysterically as you walk past.

At one point our public footpath followed a narrow lane, bounded on one side by a hedge, and on the other by a low fence, with a taller, barbed wire fence set a few feet back. Behind the fence was a massive house, almost entirely concealed by trees and tennis courts, evidently undergoing some fairly substantial building work.

‘I remember this place,’ I said. ‘It’s the one where they’ve got that setter-type thing that always barks.’

It would appear, however, that the owners of this particular pile have also invested in a huge, angry Rottweiler, which quickly found us (accompanied by the setter, a rather mild beast in comparison) and followed us along the fence, spitting and snarling wildly in a voice that made Barry White sound like a boy soprano. Such deranged aggression would have been nasty enough on its own, but suddenly I realised that the setter had got past the fence, and that somehow in the course of the building works, the barbed wire had been crushed at a point just ahead of us. Fortunately the Rottweiler hadn’t got that far yet, and we made a hasty retreat and found an alternative route through the fields instead, but it could all have turned out pretty unhappily. My face is not a particularly beautiful one, but I still wouldn’t like it to be torn off by an animal.

Surely no-one would be so irresponsible, I hear you say. But they are. This is not the first time I’ve had scary encounters with rich people’s paranoia dogs, and the story of the Averys and their Anatolian Shepherds is a salutary lesson in careless dog ownership. The BBC conveniently informs me that last year there were nearly six and a half thousand hospital admissions for dog bites, and I very much doubt that all of those were from Staffies belonging to unemployed men in tracksuits. When the revolution comes and I am ruler of the Braimeian Republic of Greater Yorkshire, the first thing I will do is to ban anyone in the higher income brackets from owning large dogs. They will be restricted to spaniels and Chinese cresteds, and I may just order my Praetorians to carry out a rocket attack on this particular residence on account of historical transgressions.

Still, you take the rough with the smooth, and the episode was only a minor blot on an otherwise pleasing day. It gave us a nice excuse to restore our nerves with a couple of pints in a nearby pub, while the staff put the final touches to a wedding marquee in the field behind us. Later we wandered through deliciously scented fields of lavender, and had a nice chat with a couple of retired east end gangsters on the train ride home. 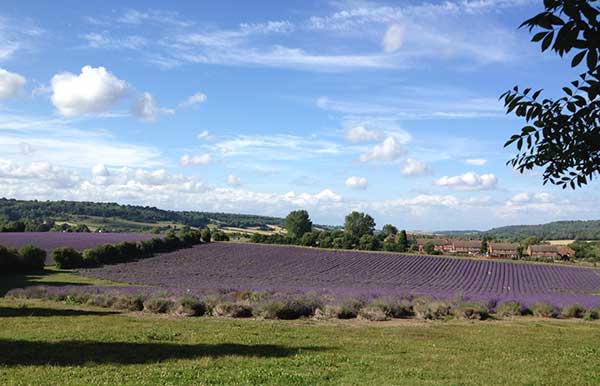