Train travel is a perpetual disappointment to me. No reader currently resident in Great Britain will need me to expand upon this statement, but I always think it’s a shame that something with the potential to be so comfortable and classy has been transformed into an experience that at best represents terrible value for money, and at worst amounts to a prolonged ordeal in endurance standing.

There are exceptions though. I have previously written about the joy that is the Night Riviera sleeper, and just last Saturday, I had the pleasure of travelling on the North York Moors Railway Pullman dining service.

For anyone not familiar with the NYMR, it’s one of those beautiful and useful rural lines that got shafted in the wake of the Beeching report, then reopened as a volunteer-run heritage line sometime in the 70s. The setting is gorgeous, and they have some grand old engines, vintage rolling stock and lovingly restored stations, as well as a walking trail, interesting holiday accommodation (like station cottages and converted carriages and stuff) and even an artist in residence knocking round Levisham station.

Their programme of events has most bases covered, and among the 40s weekends, Santa specials, wizard weeks and kids’ story trains, the Pullman dining service provides a touch of Orient Express glamour. There are afternoon ones, which I’m sure are lovely, but we went on an evening service, leaving Grosmont station round 7ish.

The service was hauled by a handsome shiny blue Mallard called the Sir Nigel Gresley, which hissed majestically on the warm summer evening as the smartly turned-out punters strolled down the platform. The food was good, the service was warm, and there were loads of lovely little touches, like flowers and red carpets, lamps on the tables and branded after-dinner mints. We had a little pause to stretch our legs at Pickering, then set off back as the last of the light died away over the heather. After four courses we sipped our coffee, sank into the wide armchairs and almost dropped off.

Of course things like this are never cheap, but it worked out at sixty quid each, which when you think about it is substantially cheaper than a ride of similar duration in cattle class on East Coast Rail. The ticket price also includes a seat, which is a nice bonus.

As we crossed the tracks at Grosmont and headed for the car park, there was a loud hissing noise, and the Sir Nigel Gresley swept slowly one final time through the station in a cloud of steam and smoke that glowed in the lights from the platform, like the closing scene of an old movie. It was a nice curtain call.

Because visual aids are important, here is a picture of me with steam coming out of my head. 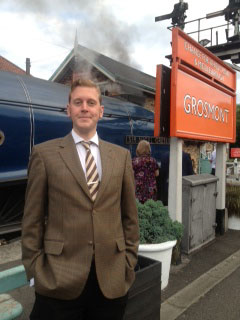