I used to work for a well-known youth charity. In many ways it was one of the best places I’ve ever worked, while there were a few things that occasionally made me weigh up the pros and cons of embarking on a killing spree with the small hatchet that one of my co-workers kept under his desk. (Fortunately I restricted myself to the less murderous outlet of scribbling waspish cartoons.)

Chief among these varied frustrations was a slavish adherence to a style of written English that had last been in common use in the days before man set foot on the moon. It was a sort of mix of Old Testament tautology, a Soviet-era delight in impenetrable acronyms and baffling forms, a considerable vocabulary of made-up words that could have sprung from the pen of Edward Lear or A A Milne, and a peculiar Germanic habit of capitalising all nouns connected with the charity. So a flag on Buckingham Palace was just a flag, but if it was on top of one of our tents in a field then it was a Flag.

One day I sketched a design for a poster, to be placed around the building for the purposes of public information. After brief consideration, my long-suffering editor decided it probably wasn’t entirely appropriate, and it since has lain hidden until I found it in an old notebook the other week. 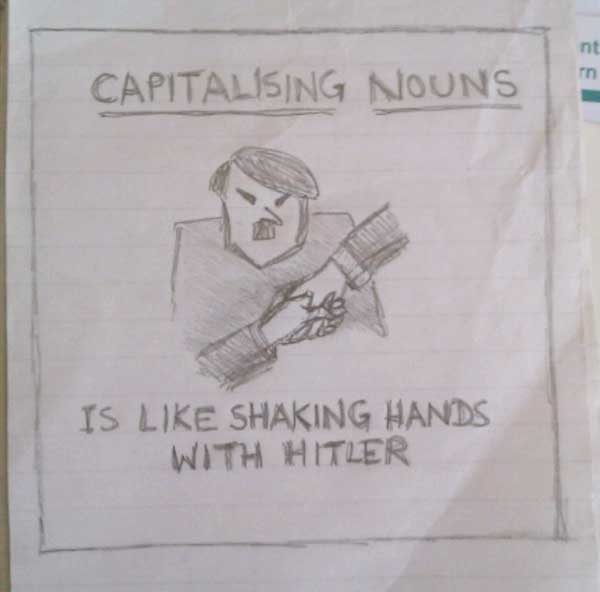