The Northern Lights showed themselves conveniently on the first evening after we crossed the Arctic Circle. They were only dim, and, far from the fluorescent green sheets I was expecting, were more like sort of reverse clouds; patches of grey light drifting across the night sky between the mountains and the stars.

Nevertheless, the passengers of the Midnatsol became feverish with excitement. Up on the sun deck, some of the English forgot themselves, shouting at the crew to turn off the lights in that peculiar way we have of treating foreigners as if they were children. Camera flashes flickered across deck as coated and hatted figures jostled at the railings to photograph a deep yellow haze behind us which was nothing to do with the Aurora Borealis, but rather the light from a small town hidden behind the mountain. Someone’s tripod got knocked over. An announcement came over the loudspeaker that they were serving celebratory fishcakes in the bar.

They appeared again the next night, much stronger this time, and with a touch of lime colouring in them. There were fewer people second time round, perhaps because it involved making your way to the dark balcony at the front of the ship, or because it was during dinner, or maybe because that life experience box was already ticked. Whichever way, once again the calm in the sky was the direct (I have to resist the temptation to say polar) opposite of what was going on down below it. All around me were lights; camera flashes, luminous screens. Was anyone looking at the sky? Everyone was making absolutely certain to record the lights, but would they have any recollections for their pictures to spark?

I have on occasion found myself so busy recording memories that I have forgotten to create any.I’d have probably done the same thing all over again if the lights had been brighter and more dramatic, but as it was I figured my camera wouldn’t really pick them up anyway, and they’d look unimpressive if it did. They weren’t, of course, but they were just too big and subtle to try and bottle. So maybe their understatement made me look at them more, and who’s to say I was right anyway?

The third time was during a bit of a gale in the night, and I didn’t see anyone else on deck. They were only very faint, and I could barely see them through the spray flicking across my glasses and the salt in my eyes, but they were there all the same, and on this occasion they were mine.

The Northern Lights are difficult to describe, because you pretty much have to paint them in a series of clichés, and I’m not up to doing it without. People will talk about them fanning out across the sky, or glowing, all of which is true. What I will say is that the ones I saw were much slower than you’d think, the changes in their shape so gradual as to be almost imperceptible – much more like long, sweeping summer clouds than anything else – and the beauty in them lay mostly in their lines. And more than anything else the lights made me want to be alone, far away from the crowds. Maybe I am my father’s son.

I had thought I was the only solo traveller on the Midnatsol, but on the last afternoon I discovered this was not so, when an old German lady, tightly buttoned up in a bright blue jacket, approached me on the windy top deck and asked if I would take her photo by the railings.
‘The proof, you see?’ I handed her my camera and she returned the favour.
‘I see you are always up here, like me’, she said. ‘Later today we will stop and people will take a bus to the Nordkapp, to the most north, but for me this is more north.’ She gestured to the bright, white mountains hemming in the gusty little channel down which we were sailing. The sun was low but bright, the air was bitingly clear and with the vast scale of everything it all conspired to jumble up your sense of perspective.
‘Not a person, not a house’, shouted the old lady over the wind. ‘This is what I came for.’ 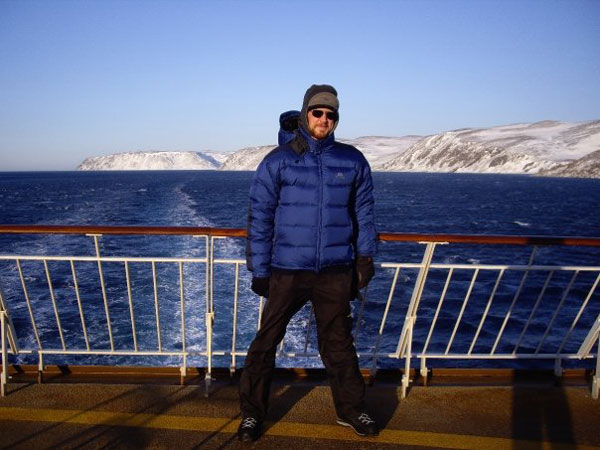