Our lifts at work are a hundred shades of shite. There are supposed to be six of them, but this number is reduced to at most four, and frequently three. They serve a fifteen-floor tower block in Vauxhall, and on weekdays round nine o’clock the queue snakes across the lobby, through the doors and out into the open air.

Fortunately a lot of people in the building are part time, which eases things a smidge, (plus climbing the stairs to my desk on the fourteenth floor is actually not all that arduous), however a few weeks ago during a particularly slow period, I decided to time my journey from the front door to the fourteenth floor office.

The times varied between around six minutes and just over twice that. Interested as to what else could have been accomplished during these wasted minutes, I took the quickest time of the week, and with the help of Google I drew up a little chart. I’ve stuck it up in the hallway, and watching people reading it is almost as entertaining as drawing it in the first place was.

[Click on the image to get a larger version] 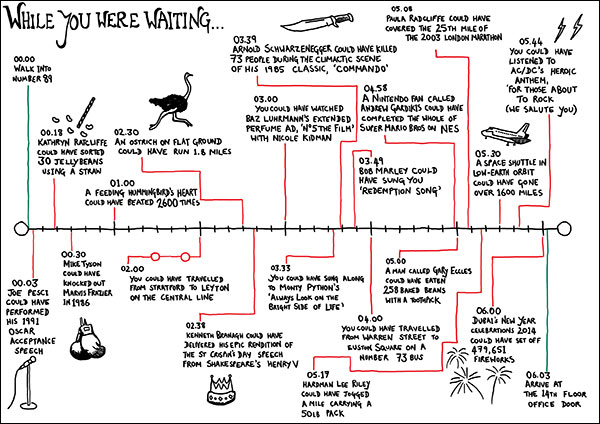