For a couple of months now I’ve been training in a haphazard sort of way for the London Marathon in April. I only got my place just before Christmas (I suspect another runner got knocked up or injured or something), and apart from this not being a great deal of time to work up to 26.2 miles, I am also not particularly sporty.

Anyway it will be an experience, and after eleven years in the smoke it seemed like something I ought to do. Every time I go down to cheer people on from the sidelines I always sort of wish it was me out loping along that tarmac gauntlet, though come April 13 I may be revising my opinions.

On Sunday I did the Roding Valley Half Marathon, just as a practice run to see what it was like running in an organised race rather than padding round the streets of London on my own. Despite my misgivings, it was actually substantially less annoying than my standard Sunday afternoon runs, and the lack of busy roads to cross and dawdlers on their phones kettling up the pavements meant that without very much effort I finished quite a bit faster than I thought I would.

It was also an excellent opportunity to observe people, and I particularly enjoyed:

1. The yummy mummies using it as a social occasion to run in a big group and have a bit of a natter. In other social sets, such ladies might meet in a café, or a restaurant, or a pub. But apparently not in suburban Essex.

2. The band of middle-aged Asian blokes (several of them none-too-svelte) in T-shirts emblazoned with their team name ‘Sikhs in the City’.

3. The two serious-looking little girls in tea dresses standing outside their house by a little table. On the table, presented on a smart tablecloth, was a large tub of sweets, several plastic cups of juice and a sign saying in spidery handwriting ‘DRINKS AND SWEETS FOR RUNNERS’. Their dad was cleaning the car discreetly in the drive behind them.

4. The spindly, big-haired man I caught up with round mile seven. His running style was an extraordinary exercise in surplus effort, with arms flailing and head bobbing around like a nodding dog going over cobbles. Loud, rasping panting was punctuated by the expulsion of gobs of spit every 10-15 seconds, and occasionally he belched wetly. It was so distracting I had to overtake and put some distance between us.

5. The two old boys supervising a corner that we passed a couple of times during the race. They had the robust look of fellows who might once have been race leaders, now gravitated to marshalling duties with the advancement of age. ‘Smile!’ Shouted one of them. ‘It’s easier to run if you smile!’ He wasn’t wrong.

If anyone fancies throwing a few quid towards my marathon attempt then it would be hugely appreciated. My fundraising page for Asthma UK is at http://uk.virginmoneygiving.com/JolyBraime, and if you happen to be going down on the day (April 13) then let me know where you’ll be and I’ll keep an eye out for you. 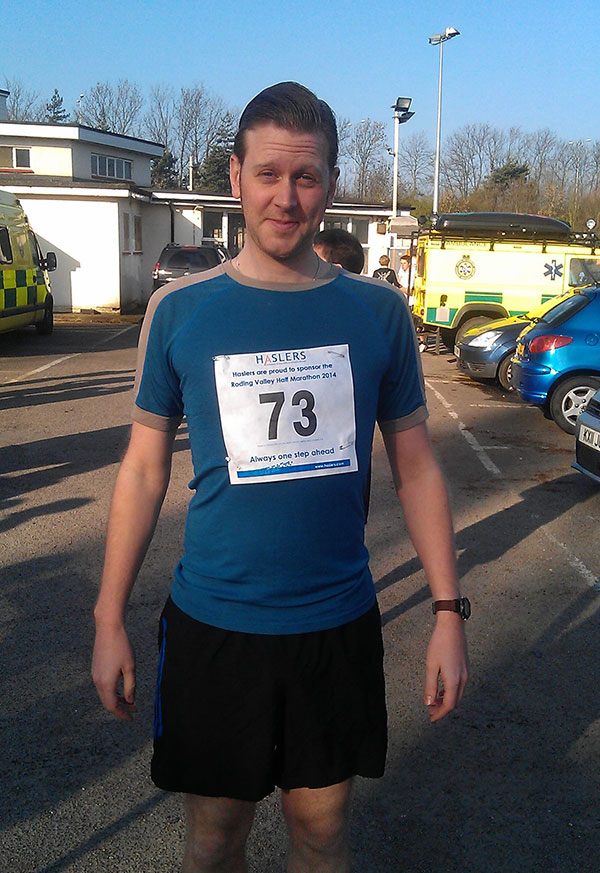