At work today, because it’s Friday, we had an email chain going round about our favourite children’s TV programmes.

Just as an aside, when I was little, I used to think the telly was called ‘the news’, on account of my mum snatching the odd ten minutes and saying ‘I’ll just put the news on’. So as a toddler I used to clamour for the news in a way that I have never done since I discovered what it was.

1. Pob. Anyone remember Pob? That cheap and offensive puppet in a perpetually-unravelling stripy jumper who famously sprayed saliva all over the camera lens at the end of the show then wrote his name in it? Watching it back now, it is remarkable how much my adult sense of humour has been influenced by Pob.

2. Postman Pat. An object lesson in making boring things interesting, there was never a dull moment in Pat’s modest existence, though the real hero was usually Peter Fogg, who often seemed to turn up in the nick of time with a special tractor. And I wonder how many children over the years burned themselves by trying to down a cup of hot tea as fast as Pat could? Notable also for his latter-day YouTube reincarnation as the profane ‘Boro Pat’.

3. Playdays. I used to love shouting along to the gormless northern kid during the theme sequence (‘but where does it goooooo?’), though I did consider in more enlightened years how entertaining it would be if the motion of the bus accurately reflected the movement of the steering wheel. My favourite was the Why Bird stop.

4. Mr Benn. I wish I lived in a world where, instead of working, you could just slink into a shop, rent a costume from Hitler in a fez, and be plunged into an adventure in a themed magical land.

Or just a world where it was acceptable to wander round suburbia in a bowler hat. That would do. 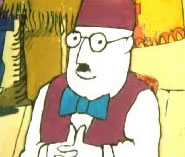