I spent my Saturday fantasy boat shopping at the London Boat Show. I have written and raved about it in previous years, but at each incarnation there is something new to catch the eye.

This was also the first one I’ve been to since I bought my own little Drascombe Lugger last year, so it was a fine opportunity to stock up on some discounted lifejackets, a set of smart new fenders and a hefty and necessary book on the maintenance and repair of capricious outboard motors.

Behold my highlights of the show.

As with cars, I am generally of the opinion that old boats look better than new ones. They just don’t always work as well. So I love companies like Cornish Crabbers who make traditional-looking vessels but using modern materials and designs. For years I’ve been completely romanced by their Shrimper.

This time round they turned up with a handful of new boats, including a tiny 12-foot dinghy and a sweet little ‘Cornish Clam’ motorboat, but the highlight was their beautiful Mystery 30 yacht.

Two manufacturers I hadn’t come across before were Hardy and Trusty. Both build motor boats – which aren’t normally my thing, except for the fact that these are built to take some heavy weather, and it shows in their lines. Somehow they just feel altogether more intrepid and less footballerish than the flash white Sunseekers and Fairlines with their videos of white-shirted wankers and lolling bikini birds playing on big screens in the background.

The sneaky bit is that they’re actually quite lovely inside, and the Hardy 40DS was the one that really caught my imagination. Despite its inner luxury, it’s got a tough, reassuring silhouette, with a trawlerish forward tilt to its wheelhouse window that makes you feel like you could have such bold and daring adventures in it that you can almost forgive its lack of a sail. Have a look at this album from their Facebook page.

British people have a love affair with anything that folds, inflates, pops up or otherwise packs away, and there’s always a brilliant area where they showcase boats along these lines. There’s a wonderful feeling of democracy about the fact that however small your house or car, you can still own a boat which you can keep in a yard or cupboard, drive to the water on the roof of a Mini and assemble yourself in a matter of minutes. You might proceed to capsize it immediately, but that is your business.

In previous years I’ve enjoyed the offerings from Nestaway boats, which break down into sections that fit inside each other like curious nautical babushkas. The concept is fun, and the boats are pretty, but I always thought they were still a bit bulky and heavy, until they turned up this year with their new stock of Nautiraid folding boats.

Nautiraid are a French company who make skin-on-frame boats, canoes and kayaks (their background is in military kayaks for special forces), all of which strip down to lightweight, flat-pack skeletons and covers that in the case of the kayaks you could carry on your back. The stuff every little boy’s dreams are made of.

Plus, with its skin off, the coracle version looks a bit like a big black banana. 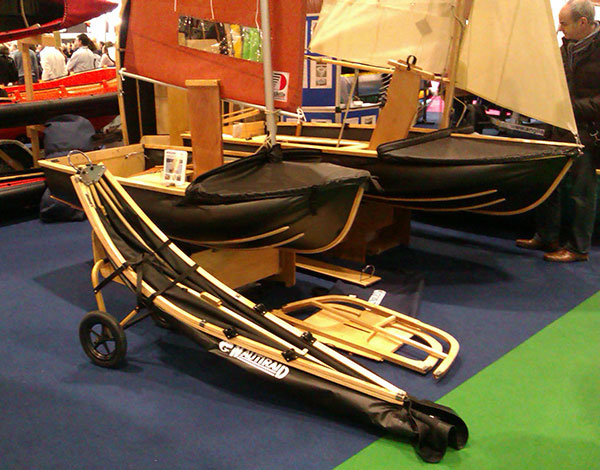