I’ve never really been a ‘gear’ sort of person. Generally when it comes to outdoorsy apparatus I tend to get something decent then use it year after year until it’s worn out.

Having said that, I’ve tried quite a variety of different stuff over the years, most of which has been fine, but some of which has been really outstanding, and I thought it couldn’t do any harm to mix in the odd blog about my favourite pieces of outdoor equipment.

First and foremost, then, are boots. I love boots anyway (Doc Martens, Redwing 877s, Fryes and Trickers dress boots are my main day-to-day footwear), but when you’re out walking, boating, camping or whatever, then what’s on your feet becomes the difference between an adventurous day out and a miserable one. We have all been that man squelching along with aching ankles, sodden socks and blisters, contemplating the beginning of trench foot.

In winter, or in mountainous or arctic conditions, Scarpa Mantas with a pair of gaiters have served me well (more about those on another occasion maybe), but at any other time of year, you probably need something lighter. Since spring of last year, I’ve been wearing a pair of round-toe Wingshooters, and they’re pretty much the comfiest boots I’ve ever had. Irish Setter, who make them, are a hunting/work boot subsidiary of Redwing, and the moc-toe version of the Wingshooters look a lot like my Redwing 877s.

That’s pretty much where the similarities end though. The Wingshooters are padded, cut to give you plenty of movement round the ankle, needed almost no breaking in (apart from a bit of a stamp around in the mud to take the embarrassing new sheen off the white soles) and seem completely waterproof. I’ve tramped through ankle-deep puddles and stayed nice and dry.

If you were looking for reasons to quibble then they’re quite high, and I suspect a lot of people would prefer a lower ankle, but I’ve found them flexible enough that it’s not a problem. Also lots of Yanks don’t like them because apparently they’re not made in the USA, but being English, my patriotic shopping can only realistically extend as far as meat and veg (and even that’s a bit of a struggle down my local Tesco – why does all the bacon come from Holland?) They’ve stood up to some fairly rough treatment, so I don’t suppose their Chinese factory origins matter all that much.

They don’t need a lot of care (the odd scrub to get the mud off and a smear of mink oil is about the extent of it), and at about 170 dollars they’re not outrageously expensive, even if you do have to go through the hassle of importing them from America. I reckon comfortable feet are worth investing in, and they look nice enough to wear off the hills too.

I imagine they will join me on plenty more adventures before our time together is up. 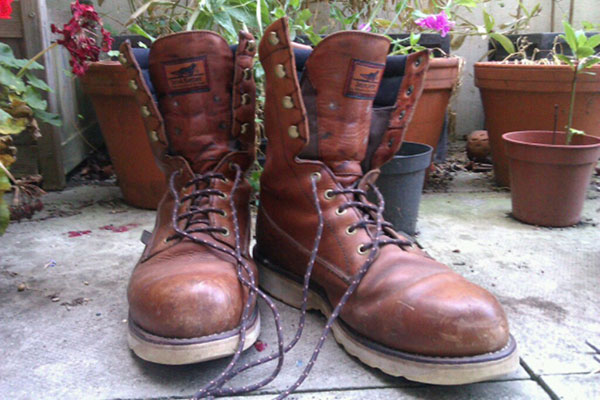