I spent the most recent bank holiday weekend in France. My old mate C was getting hitched in a fairytale castle in Pays de la Loire on the Friday, so the young lady and I decided to make a long weekend of it.

Searching around for a place to spend Saturday and Sunday – preferably one that wouldn’t be too densely populated by topless English people with skin like lava – we hit on Le Mans. Not perhaps the most obvious of destinations, given that the 24-hour motor race for which it is mainly known was way back in June, but bear with me. There’s still plenty going on in town once the roar of the engines has died away.

Did you know, for example, that Le Mans has a strikingly beautiful mediaeval city district? Or a vast cathedral complete with 12th century stained glass and flying buttresses (I love a flying buttress)? Or one of the best-preserved Roman walls in Europe – a tall, ornate structure, with red geometric patterns, that stretches along the banks of the Sarthe? No, nor did I before two weeks ago.

What it also has, for the duration of the summer months, is an incredible festival of light called the Nuit des Chimères. For a few hours after dark each night, the streets and buildings of the old town come to life with light shows. Coloured lamps throw the gaudy images of monsters and gargoyles onto the cobbled streets, a projected tea party of mediaeval lords, ladies and minstrels sing motets at a banqueting table in an old square, the back gate of the cathedral becomes a giant stained-glass window, and in a courtyard outside the museum the ghostly white figure of a lady paces sadly behind an illuminated waterfall.

Most astonishingly, the entire vast façade of the cathedral lights up with a series of animations. During one scene, the eaves and buttresses seem to turn to an architect’s sketch, then the towers go transparent to reveal tens of moving staircases winding through them. The next moment the cathedral becomes heaven and hell, with angels fluttering on the rooftops and demons clawing their way up in vain from the flames that lick at the base of the walls. There are a whole series of different dramas and displays, and you really just need to go and see it to appreciate it.

To enhance the effect, I can also recommend a dinner of rillettes (my new favourite starter), steak tartare and lots of red wine before you start your wander through the glowing streets. 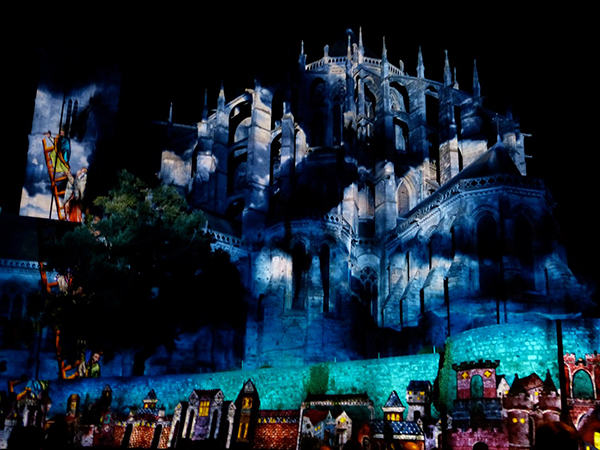