On Friday, in a highly uncommon display of romance, I took my girlfriend to Venice for the weekend. I attempted to conceal our true destination by claiming that we were going to Butlins in Bognor Regis (I couldn’t resist adding a little colour by confiding that we were sharing a chalet with a stag party from Blackpool), but this deceit didn’t entirely hold up with the admission that euros and a passport would be useful.

Anyhow, it was lovely. Of course it was hot and sticky and expensive, and the place was overrun with shuffling tourists, but none of those things came as a surprise. Venice is utterly beautiful, and the simple novelty of getting everywhere by boat or on foot, through a street system completely devoid of any logic, is a thing of delight.

A weekend is far too short a time to get to know a place, but nevertheless I did discover the following things.

1.    By far the most disproportionately expensive thing in Italy’s priciest city is beer. The shock of this is compounded by the fact that it doesn’t always appear on menus, so you casually order a drink with your food then realise when the bill comes that your small glass of lager was more expensive than the meal. Cheaper refreshment is to be found on Campo Santa Margherita, along with the excellently named ‘RAGING PUB’.

2.    Dogs are much more popular than cats in Venice. In fact I only saw one cat, a fluffy thing slinking around in an enclosed courtyard, and from the distance we were at I suppose even that could have been a Pekinese. By far the most common dog appears to be the Yorkshire terrier, and it is nice to see that Venetians recognise the superiority of Yorkshire breeding.

3.    The school of San Rocco is amazing. The upper floor is almost entirely painted by Tintoretto, but my favourites were the carved wooden allegorical figures by Francesco Pianta il Giovane which circle the edge of the main upstairs hall. Tintoretto himself is represented there, while the figure of Curiosity, wearing a wide-brimmed hat and masking his face impishly with his cloak, pleased me immensely. Apparently my tastes are entirely predictable, since I was there on a recommendation from my brother, who called when I got back and said ‘How was San Rocco – I bet you liked the carvings best.’

4.    People who don’t speak English as a first language have brilliant slogans on their t-shirts. Walking along the Fondamenta Nuove I saw a severe-looking Italian teenager, her chest emblazoned with block capitals proclaiming ‘SHE IS THE ONE WHO IS ALLURE’. Later on, boarding a vaporetto at a stop on Murano, I spotted a Japanese girl. The picture on her t-shirt was of a lady in Edwardian dress pouring tea, rather like a vintage advertisement for digestive biscuits. The slogan, in an elaborate, old-fashioned font, said ‘Lance Armstrong, champion of the Tour de France’.

5.    Behind the Peggy Guggenheim gallery, a relatively modest Venetian mansion that plays host to a disproportionate number of the big guns of 20th century art, a statue of a priapic horseman by Marino Marini leers gleefully skyward, his bronze arms flung wide and his crudely welded-on boner angled provocatively at passing traffic on the Grand Canal. The intriguing thing is that my brother has previously seen an old photo of Peggy herself out on that very veranda, and the horseman’s immodest appendage is distinctly missing. Where did it go? Was it attached later? Had some rascal stolen it? Was it somehow doctored out of the photo? The answer to this question cannot fail to be interesting.

There’s also a wishing tree at Peggy Guggenheim’s, gifted by no less than Yoko Ono. The basic idea is that you write your wish on a piece of paper and affix it to a branch of a large, potted olive tree.

Venice, I will be back. 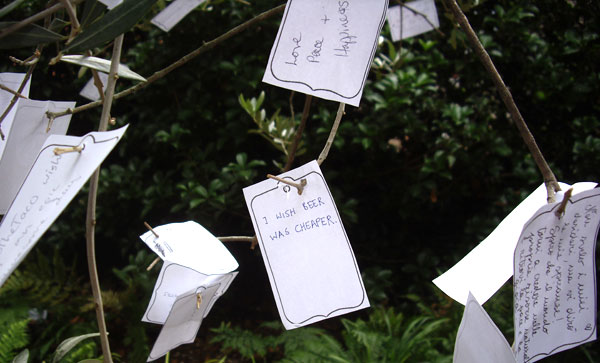