They were burning the heather up on Danby Rigg when we walked by the other day.

It’s odd to think that something which appears such a wild and primal environment is in fact artificially created with a great deal of effort, all so that a small, slightly comical bird can flourish and then be shot at for four months of the year. But so it is.

If you’re unfamiliar with moorland burning, then that sort of patchwork look that grouse moors have from a distance is the result of small, quick fires set during the burning season between October and April. These fires (carefully controlled by spraying and beating) singe off the old brush above ground, but don’t burn long or hot enough to kill the roots, and in springtime the heather sends up young green shoots.

These shoots are the favourite food of the red grouse, that entertaining little bird that blasts out of the undergrowth with a manic cackle, invariably when you least expect it. But just as the grouse need the young heather to feed on, they also need older heather to raise their chicks in, and mid-length stuff to hunt around for flowers and seeds in. So by keeping a range of heather at different stages on the moorland (along with other measures like predator control and those little piles of medicated grit you see by the paths sometimes), keepers and other moorland workers maintain an environment in which the birds can flourish, ready to face the guns on the twelfth of August each year.

The practice is an oldish one (though not as old as all that – an information board I once saw at Danby Lodge claimed that its origins were in the early 20th century), and not without its opponents, by any means. But it does look rather dramatic when you’re tramping across the moor on a winter’s afternoon. 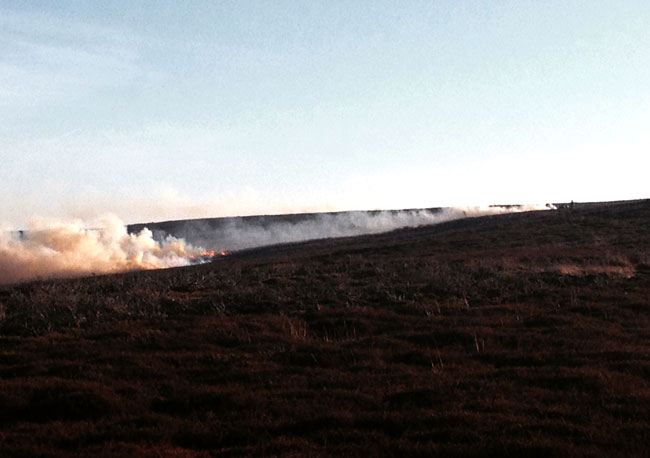