While it may well be true that absolute power corrupts absolutely, it’s also true that the most comically tiny amounts of responsibility can often have the same effect. I’d like to believe that this was a modern characteristic of our great nation, but these little corporals show up at least as far back as Shakespeare, meaning that, as far as I can tell, the strutting martinet is as English as pint pots and shit trains.

Last Monday evening, an experimental social media campaign for our marketing department involved me trundling round London by bus, tube and boat, taking pictures and video footage on an iPhone of a man who was dressed as a children’s book. His costume consisted of a large, specially-printed cardboard box and a pair of tights, and he was racing another ‘book’ between Chingford and South Kensington. 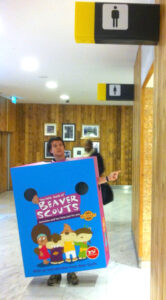 There were a variety of challenges to complete en-route. I photographed the book with people in uniform; he tried on a hilarious and expensive watch designed, I imagine, to complement a white Land Rover; he read a Where’s Wally? book and he got his picture taken with an orange lady from a cosmetics counter (quite obliging and friendly, but surprisingly self-conscious about being on camera, considering that the occupation of an orange lady consists largely of advising people on how to look nice).

Then came the challenge to try on a pair of shoes.

It’s difficult to be subtle when one member of your group is wearing what is essentially a bright blue billboard, but we didn’t really think anyone would mind us pretending to put on some trainers, and anyway there wasn’t anyone in Sportsdirect apart from a shady-looking bloke in a tracksuit skulking around and whispering into his Blackberry, who I assumed was a shoplifter. Turned out he was the (indignant) store manager, and he was calling security on us.

The Westfield security guard was a portly fellow, who informed us smilingly but forcefully that, since Justin Bieber was at Westfield that night to turn on the Christmas lights, we were posing a security risk and would have to leave.

This was not the only point of the evening that the book was deemed a threat to the public. Later in the evening, while passing a run-down fruit machine arcade with a McDonalds in front of City Hall, we were confronted by another guard who told us we needed a permit to be there. We explained that we were just walking along a busy path through the centre of London, and didn’t intend to do anything more outrageous than be in a costume, but nonetheless he escorted us as far as Westminster Bridge just in case the book suddenly decided to expose himself in front of children or the elderly. Half way there, a supervisory voice barked out from his radio ‘HAVE YOU GOT RID OF THE BOOK?’

All this reminded me of an occasion a few years back where, one sticky summer evening, a group of us took a big container of juice and some plastic cups down to Trafalgar Square, and gave cold drinks out to passers-by. We were immediately pounced upon by local heritage wardens, who told us we needed permits to be there and had to leave at once. We tried to draw the distinction between a handful of fools handing out cups of squash and, say, an English Defence League rally, but rules are rules, particularly when you have a special hat.

To be fair, I have usually found members of the Metropolitan Police to be immune to this kind of absurd behaviour, perhaps because they have a little more training, or more likely because they simply have bigger fish to fry. However, there are exceptions to most rules, and I have fond memories of the two officers who attempted to take down Santacon a couple of years back. They halted several hundred half-cut revellers in Santa outfits at the bottom of Duke of York steps, demanding to know who the organisers were.

‘Santa organised it!’ Was the response.

So they asked where Santa was, and after a beautiful Spartacus moment, they gave up, got back in their car, and disappeared. 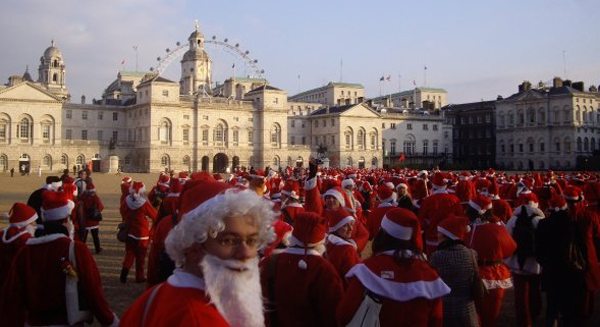