The Pasvik valley is the last place in Europe where you can find brown bears. My new friend from the tourist office had told me that they were hibernating so I wouldn’t meet one, and that anyway meeting bears wasn’t really something you should hope for. I asked if there was ever any trouble with them.

‘Almost everyone who is attacked by a bear has a gun in their hands. I go to the forest sometimes to pick berries, and my friend said to me you have to sing, and smoke, then the bear will know you are there. It’s quite difficult actually, singing and smoking while you’re collecting berries. It’s the people sneaking around who the bear doesn’t see who he attacks.’

The cabin in Pasvik that I stayed in for a few nights was next to a big family home, with at a guess forty or fifty huskies in a yard to the side. The family took sled tours of the valley, and raced the dogs in the Finnmarkslopet, the 1000km dash out of Alta each March. Chained up outside the front door was a huge, heavy-set mountain dog with an even bigger bark, and there was another one over by the kennels. They told me they were watchdogs to keep the bears away.

The cabin was small and warm, and the bathroom and water supply were in the main house, meaning that I had to pass the watchdog and a husky with a bandaged leg that they were keeping inside, out of the cold. As I passed, it got shakily to its feet and looked up at me with mournful eyes. It was only a young dog and had got into a fight with one of the big boys. Sometimes at night I could hear it making a sad whistling noise.

I cooked my own food on the hob, living off a little stash of tins, dried pasta, crackers, tea and fruit that I’d picked up hurriedly in Kirkenes, and in the evenings I wrote. It was a pleasant way to spend a few days, particularly as, after lifting my rucksack at an awkward angle off the bus, my back was paining me. An old injury from a Peruvian drunk, who hit it with a brick while trying to maim his mate because he thought fighting would impress the girls. ‘Chicos malos’, Zoila had said.

On my first full day, limping a little but not ready to spend the day indoors, I set out up the road for a little while, then struck off along one of the marked snowmobile tracks through the forest. It was a gentle start, and I can’t have been out more than about four or five hours. I had a small scale map that I’d borrowed from the husky people and a compass in my pocket, but the map wasn’t really detailed enough to navigate reliably by on its own, so I just followed the marks of the skidoos.

It was wonderfully still, tramping up through the snowy forest among half-buried evergreens. The sky was overcast, and it was windy when the woods opened out round frozen pools. I began to wonder if the snowstorm that had been predicted for the day before would come down on me when I wasn’t expecting it. I kept checking I could remember my way back, but the weather didn’t really come until after dark anyway. I was quite warm, hot even, wrapped up in my many layers of fleece, wool and down, but ice formed in the tea mug that I was carrying in my rucksack, and the top got stuck on my thermos.

Walking up the drive to the cabin I crossed paths with a man getting out of a van. His name was Thomas. He was wearing what looked like leather trousers, laced up the sides, and had very pale blue eyes. I wondered if he was Sami.
‘Just strolling about?’ he asked, with a grin.
‘That’s it. Just getting used to the cold.’
‘Oh this isn’t very cold’, he laughed. ‘When did you arrive?’
‘Yesterday afternoon.’
‘You just missed the real cold then. It was… minus forty, I think.’
‘Jesus. I’m glad I missed it.’
‘Well you never know.’ He waved in the air ‘The weather here… maybe again tomorrow.’ 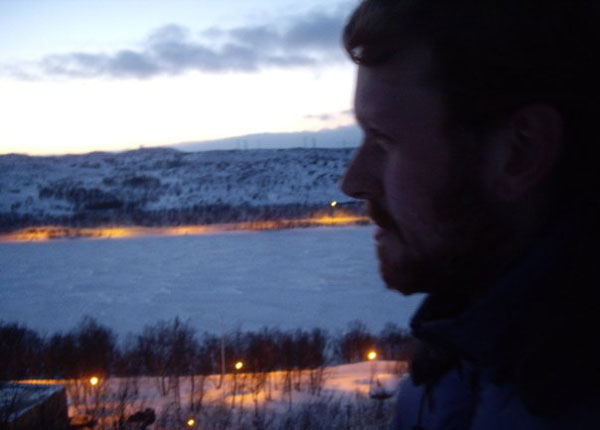