Ever since I discovered, aged 18, that one could produce forty pints of beer for the princely sum of £8, I’ve always had a place in my heart for home brewing.

I began with brew kits from a little shop in Kirkstall, and experimented with ginger beer (one batch of which developed a lovely sparkle due to a freak fermentation), wine (total disaster) and a sort of cider made with crushed apple pulp and ginger (drinkable, but crashing hangovers).

Later, when my uncle bought me a hop vine for my 24th birthday, Christian and I began harvesting the flowers and using tinned malt extract to produce our own bonfire bitter, which, given that it was cooked up by two amateurs in a jam cauldron, could have been a lot worse. In line with recent drinking preferences, my thoughts have lately been turning to cider production, and my tube reading at the minute is The Ciderist’s Guide, by Simon McKie.

There’s something wholesome, enjoyable and somehow pleasingly illicit in brewing up your own booze, but my own minor dabbling pales in comparison to that of some river folk we encountered on Saturday, as we puttered sedately down a northern canal in a smart narrowboat called the Lilypad.

Passing a row of boats moored up at the side, I spotted one that was stacked with rows and rows of plastic demijohns and brewing buckets, airlocks bubbling away in the warm spring sunshine. Delighted by the scale of this operation, I shouted back to my three fellow crew members (who were all at the other end of the boat), gesticulating with double thumbs up. A grinning head promptly popped out of a hatch at the end of the brew boat, and invited us to pull over and try some.

We found a place to tie up, then left one of our party with the boat, while the other three of us strolled back along the towpath to see what was on offer. Which according to a printed price list turned out to be quite a lot. As well as cider and perry, there was a lengthy list of hedge wines (many of which were out of stock due to bumper sales earlier in the month) and even a fairly impressive array of flavoured spirits. We tried not to look too surprised when the proprietors announced that these last were in fact produced using their own on-board still, but when we had a tentative sip of their homemade coconut rum (expecting pure methanol), it proved to be quite lovely.

‘The ones that don’t work, we keep for ourselves,’ confided one boatie brewer, as another smoked a roll-up serenely and watched a dead fly revolving in one of the airlocks as the gas bubbled through. ‘We had a cherry wine and a carrot wine and for some reason they both turned out awful, so we mixed ’em and drank it ourselves. I wouldn’t say it was great, but it was a bit better.’

The moonshiners themselves, clearly no strangers to a glass of the good stuff, were such characters that I’m sorely tempted to describe them, but given that their business is without doubt highly illegal, I think it would be a shame to include any more precise details of their appearance or location.

All I shall say is that, should you happen to find yourself on a waterway in the north of England, keep your eyes open, and hope that like us you can stock up on a Morrison’s bag full of tasty cider and perry, before either the law catches up with them or a mistake with the distilling operations turns their little floating brewery into a huge fireball at the side of the canal. 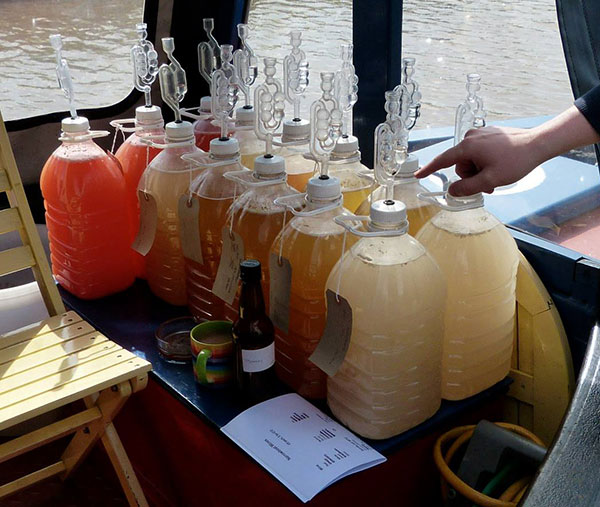