The MS Midnatsol was a most commodious vessel, the newest of the Hurtigruten coastliners. With a restaurant, café, two bars and a Jacuzzi it was in fact almost a cruise ship, but with the on-board entertainment limited to one bloke on a keyboard singing the classics with a Casio a couple of times a night. Nestled among the Norwegian volumes in the ‘library’ (a lounge with two bookcases and some board games) was ‘Arnold Ziff: The Making of a great Yorkshireman’. Snow swept across the deck as we left Bergen, and in an hour or two the city glow faded from the sky.

Apart from a handful of children, a teenager or two and what appeared to be a lesbian couple hovering around the 30 mark, I seemed to be the only passenger in their 20s, and as far as I could tell, the only one travelling alone. Broadly represented, the French were generally the youngest, and in the biggest groups, usually with grandparents and children in tow. The Norwegians were more in their forties and fifties, and the British and Germans seemed the oldest groups, almost invariably in couples. I only met one pair of Americans, who sat down next to me at breakfast one morning.

They were from Atlanta, and where the lady was quite chatty, the bloke was nice enough but taciturn. I’m not much of a morning conversationalist either. While his wife went to get coffee we made sparse conversation, centred around the fact that the breakfast buffet was temporarily out of bacon and eggs. I was glad I’d already finished my own large portion by the time they sat down.
‘I was watching the television the other day’, he said. ‘That Tony Blair was on. He was visiting… somewhere. I always liked him.’ He smiled. It was a noble effort.

Up on deck it was quieter than you’d have thought. Di and Bri had warned me they were pretty lax about letting people out whatever the weather, and they were right on, a fact which suited me perfectly. Come wind, snow or rain, and when the ship tipped a little, you could still get out on to the open ‘sun-deck’, though in fact the weather was pretty still a lot of the time. To start with, I could go out in just a jersey and jacket, but by the evening of the second day I was suiting up in lined salopettes and an extra jumper, pulling my neck gaiter up over my nose and mouth and tightening my hood to stay out longer. It was extraordinarily beautiful, and I had that feeling like I used to have when I was a child swimming in the sea, where you know you have to go in soon but you’re having too much fun and want to draw it out as long as possible. One afternoon I only put on my thin gloves and my knuckles got chapped in the cold.

Sunset was the prettiest time, when the mountains turned pink and orange. At night, even whiter than during the day, and speckled with deep brown patches of tough forest, they stood out tall and frightening in the dark on either side of us. The water was black and shiny like oil. I love to feel small.

Most of the rest of the time I sat in one of the bars, or the café, writing or reading with a cup of tea and my compass open on the table. I watched it shift as we hugged the crumpled Norwegian coastline. It might swing west or east, sometimes touching ever so slightly to the south, and even when it was dark outside you would know we were rounding a headland. Occasionally the broad needle would settle squarely north, and you’d grin inwardly.

On the afternoon of the second day we stopped in Alesund – a mild, western town that was almost entirely rebuilt in art nouveau style after a fire at the beginning of the 20th century. Along with pretty much anyone else on the boat who was fit enough, I climbed to the viewpoint on a hill above the town, driving my boot heels into the slippery, compacted snow and hauling myself up the railings. At the top there was a pretty panorama across the town’s various islands, but I was more concerned with what lay over to the right, a blue-green haze lying on the horizon to the north. 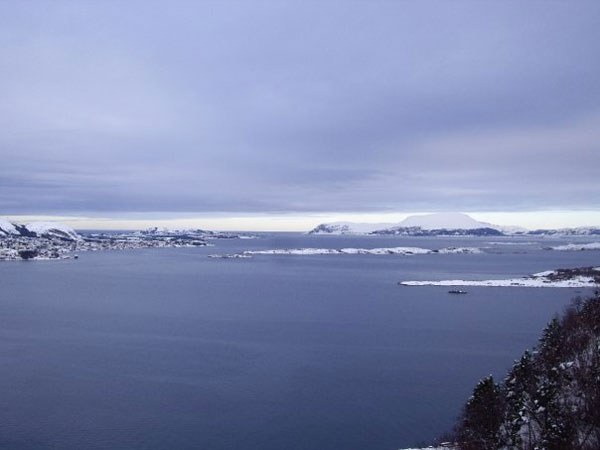