I made a knife the other day.

Speaking as a man who spends most of his life cranking out words, pictures, spreadsheets and diagrams that exist mostly on screens, it’s nice to produce a real, tangible thing from time to time. If only to remind yourself that you can.

A while back I bought a Karesuando knife kit from a well-stocked Welsh company called ProAdventure. Along with some fairly basic instructions, you get a steel blade (I like carbon, but you can get stainless too), a block of curly birch, a rough slice of antler, a brass bolster and the bits and bobs to make a sheath (leather, thread and a plastic blade cover).

If I were nit-picking, I might suggest that a tool list would also be a good thing to mention up-front. Fortunately almost everything necessary was already under my bed, but if it hadn’t been, then kitting myself out would have been a rather costly process. In case you decide to follow my example, I ended up needing: a power drill; a bench clamp; a saw; needle files; Gorilla glue; a hammer; an electric detail sander; chisels; woodcarving knives; sandpaper and beeswax.

Hardware aside, it took me an evening and a morning of whittling, drilling, filing and sanding, and at the end of it I was left with a pretty object that, while far from perfect, is immensely pleasing.

I was going to take it straight round to E’s flat on Sunday afternoon, to proudly show off my creation, but then I remembered that wandering round London with a shank in your satchel is still illegal, even if you made it yourself. 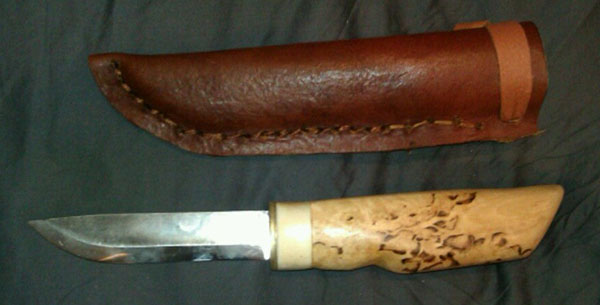