I love the global era in which we live, though its benefits can sometimes be drawbacks too. While it is rather fine that less than 24 hours can elapse between drifting through a Spanish flea market and turning on my computer in an office by Vauxhall Bridge, such transitions can also be a little bit jarring.

I’ve spouted my atrocious Spanish through Andalucia and Galicia, but this fleeting weekend excursion with the ladyfriend was my first trip to Madrid. I challenge anyone to spend any time with the Madrilenos and remain unimpressed by their magnificent vitality, not to mention their sheer stamina.

In the grand tradition of previous posts on Florence and Venice, here is a little list of interesting things.

1. The rhythm of life is completely alien to an Englishman.

Our self-congratulatory politicians like to call London a ’24-hour city’, but for my money Madrid is much closer to the mark (so long as you don’t count the dead hours between 4pm and 6pm). You’ll see queues of people still rolling into restaurants at midnight, and as we strolled home round 1am, every bar we passed was rammed.

2. This nocturnal lifestyle extends to children too.

There is something odd about wandering past a play park in the dark and seeing it full of squealing ankle-biters. Almost as strange is when you’re in a tapas bar at half nine and the table next to you contains at least three chattering generations of the same family, the oldest appearing to be well into their seventies and the youngest clearly under five years of age. Perfectly reasonable, of course, but you wouldn’t see it in London.

3. It is almost irresistible to pretend to be Hemingway.

If I’d thought about it a bit further in advance I’d have grown a natty little moustache and taken a travel typewriter. As it was, I had to make do with a mug of freezing beer and a plate of croquetas, Iberian ham and manchego in the lovely Cerveceria Alemana on Plaza Santa Ana. The place doesn’t look like it’s changed much since Hem’s day, with plenty of bustle and shouty waiters in white coats and bow ties pushing cheerily through the crowds.

4. If I’d needed that typewriter, I could easily have found one.

I saw several in the tat maze of the Sunday morning Rastro. I’ve heard it called Europe’s biggest flea market, and there’s an awful lot of crap, from grimy secondhand bras and army surplus gas masks to suits of armour, antiquarian books and back issues of classic comics. The main street is a rather boring bastard offspring of Camden and Chapel markets, selling cheap clothes and hippy tat, but turn down most of the side streets and the antique shops seem to have just tipped their stock onto the pavements. Creepy old dolls with grubby faces, chipped lipstick and thinning hair appear to be a speciality.

5. There is a completely baffling lottery that the entire city is obsessed with.

On Saturday night, crowds outside the lottery offices choked the streets, while in the squares and parks gypsies and tramps flogged pages of tickets from stalls, rugs and clipboards. If anyone understands the reason for this hysteria, or even just how the lottery works, please do enlighten me.

Try ordering a cup. You’ll be lucky. If you want to leave no doubt as to your poor state of sanity you could ask for some milk in it. Watch the curious yet indulgent smile that plays across your waiter’s lips, as if you might be some crude mountain tribesman asking for cow’s blood and marsh water served in an old boot. 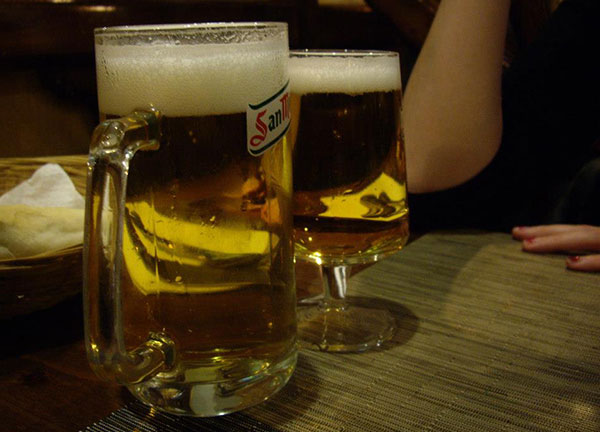