One of my jobs every Christmas, inherited from my dad, is to take a big lump of Blu-Tack and spend several hours sticking a hundred or so Christmas cards to the wooden beams in the drawing room.

I know most people just put them along pieces of string, but my mother insists that they don’t look nearly as nice when they aren’t all the right way up. We Braimes have never been great believers in doing things the easy way when a great deal more effort will produce a marginally preferable result.

Oddly enough, I actually rather enjoy this laborious task. There is a nice sense of method about it. The beams are not all the same depth, so you have to remember to save the really big cards for the middle of the front beam and the edges of the back one. You put the long ones on a separate pile for the right hand side of the front beam, and keep back the little ones because they come in useful all over the place.

A perk of the job is that you get to give the most prominent spots to the ones you like best. Among those taking pride of place this year are an original photograph of a bunch of Santas swaying unsteadily in a Venetian riverboat, and a peculiar-looking sort of dragon creature created by Pyramid of Arts. There is a Japanese couple who every year send unfailingly beautiful cards, and I always give a good spot to the family snapshot from our Austrian friend G. (I know it’s not technically a card, but you make your own rules in this game.)

You also spot trends in card-buying, not to mention who is using up last year’s stock. The Musicians’ Benevolent Fund seem to do consistently well out of my parents’ circle of friends, and I wonder if two of my aunts, whose relationship is rather strained, realise that they share a long-standing fondness for pictures by mouth and foot painters.

Best of all, of course, you get to read the messages. These hundred cards are a wide tapestry of human life, and I soak up all the information, from the tedious round robins to the almost illegible scrawls that condense a year of trials and tribulations into 25 words. Many of the updates are written by or about people I have never met, but the characters are often familiar from previous years’ cards, and it is pleasing to see their families grow and their health problems resolved by the indefatigably hardworking NHS.

Of course there are the sad ones too. Sometimes a brief note will outline the end of a life, while occasionally a name will just drop off the card. At the other end of the scale, as children grow up, get married and have children of their own, some people tire of reeling off a long list of names, and for the first time in 30 years go back to sending cards as a couple. I like the ones who lazily encompass the younger generations with an expansive ‘etc’.

The most common theme, of course, is reunion. At least one card in five professes a desire that this next year will be the year when they finally come to stay, or pop round for coffee, or in some other manner break the many years since they last crossed the threshold of Glebe Cottage.

Who knows, maybe it will. In the meantime, friendships can be maintained via the Christmas post. 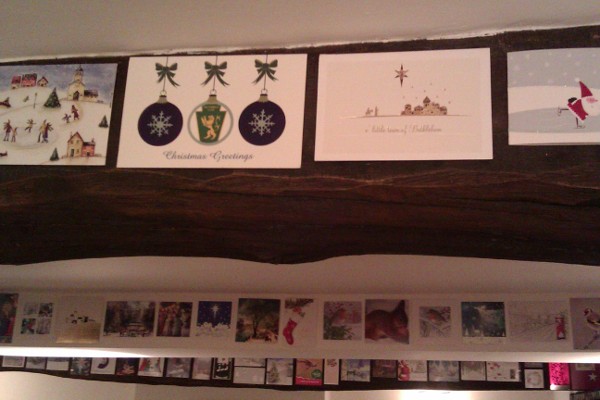