Frequently, of course, it’s just vandalism. Most small children got bored of writing their name on things about three weeks after they learned to do it, but apparently some people continue to spray, gouge or otherwise tattoo their name on every available surface well into their teens and twenties.

The graffiti I really like, though, is when anarchic principles are derailed by softer sentiments. On my way home from the school bus, I used to cut down a ginnel where someone had scrawled in Tipp-Ex ‘FIONA IS PRETTY!’ Compton it was not.

On my lunch break today, I noticed that someone had expressed themselves in spray paint on the greenish beach wall of Albert Embankment. Instead of writing something witty, territorial or unintelligible, this person has just thought of a thing they like and emblazoned it on the river wall.

I might slink out after dark and scrawl ‘HAM SANDWICHES’ on the bridge just near my flat. 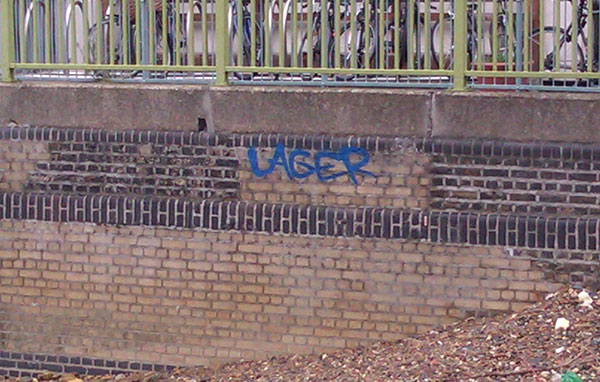