Hiking is all about being adaptable. Gear does not make the man, but it helps make the man more comfortable. Most people can only justify the expense of one pair of hiking trousers, but after some years, I’ve come to the conclusion that if you spend a lot of time outdoors, it’s worth having three.

Filson is sort of an American West Coast version of Barbour, with a satisfying dose of rugged frontiersman heritage. They specialise in tough waxed cottons and heavy mackinaw garments to keep out the cold and the wet.

In keeping with their history supplying hunters, agricultural workers and the timber industry, most of the stuff is rather heavy for hikers, but I’ve found their single tin pants, made of paraffin-impregnated ‘tin cloth’, to be pretty much ideal for British winter rambling conditions, particularly out on the moors and tramping through thick undergrowth. They’re warm, waterproof, windproof and thornproof, though you’ll probably want to wear a pair of long johns underneath as the texture of the cloth is a bit clammy.

When I first bought my Filson tin cruiser, a jacket that has become something of an old reliable these days (see my old blog on waterproof jackets), I had to import it from the US of A, but fortunately a couple of years ago Filson opened their first UK store in London (on Newburgh Street, also home to two of my other London favourites, Redwing boots and Peckham Rye ties).

No-one seems to do outdoor gear like the Swedes, and there were times last summer when I felt like a walking advert for their great golden-haired nation as I sat outside my tent wearing Fjallraven clothing, with a Fallkniven F1 on my belt and my dinner bubbling away over a Trangia stove.

I wear my Barents trousers more than any other piece of clothing in the outdoors except my boots. They’re really tough, with plenty of pockets (not that I really like stuffing too much in my trousers, but I do like somewhere on my leg to keep my OS map or guidebook to hand), and mine show few signs of their age or the hours spent on my knees getting campfires going. Best of all, like a lot of Fjallraven stuff, they’re made of versatile G1000 cloth, which you can treat very easily with a special wax to improve its waterproof and windproof qualities (the wax rinses out easily in the washing machine if you want to make the trousers more light and breathable again).

They’re a smidge heavy for hot days, and with my chicken legs I like a slightly warmer trouser when it’s really cold (I’ve noticed they do a winter version, which might be worth looking into when the ship comes in), but otherwise, with the addition or subtraction of the wax, the Barents trousers are a winner.

Mine came from Woodland Ways (who I can heartily recommend), but quite a lot of outdoor suppliers carry them.

TAD gear is apparently fairly culty, and demand often outstrips supply, making their wares rather difficult to track down. I struck lucky on my amphib cargo pants when a mate imported them from the US then found the waist to be a little generous for him, so he let me have them on the cheap (cheers, Anil).

Their website is a bit macho and hilarious, but my cargos were a surprisingly well-designed bit of kit, and despite only taking them along as a spare pair when I went to Norway last summer (I planned to wear the Barents), I ended up living in them for pretty much the whole month. They’re extraordinarily light and breathable, they’ve got a million pockets, all cleverly cut to minimise the chances of things falling out, and despite their flimsy appearance they’re remarkably durable. Best of all, they dry incredibly quickly, which is a more valuable aspect than you’d think when you’re sleeping in a very small tent every night and your ability to get your kit dry is limited.

Of course, I have at least one friend who would tell me that summer is for shorts and shorts only, but I’ve inched down enough nettle-choked paths to know different. 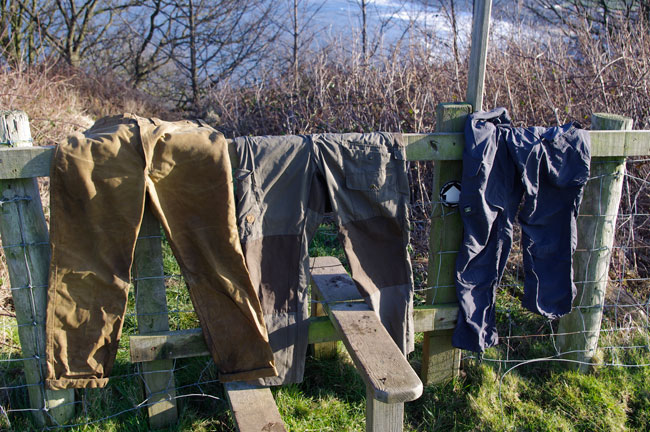