I’ve never been a great fan of central heating. A cold house is a grey, unhappy place, but somehow the ambient, uniform warmth you get from radiators and thermostats is a sterile sort of heat. It’s lovely to be either hot or cool, but there’s little to really enjoy in the in-between land that we inhabit most of the time.

For my money, when the weather is cold, it’s all about little enclaves of comfort; the heat you get from hot baths, warm beds, other people and open fires.

Fires are something of which I am especially fond, and it’s almost worth getting cold just to thaw yourself out by the flames, in much the same way that a bath is never as fine as when you’ve been out walking and got completely soaked. As Roger Deakin once wrote, ‘Our cosseted, over-heated way of life may have robbed us of a natural ability, evident in most mammals, to enjoy both extremes of the spectrum of warm and cold.’

It’s a sad thing that so few places in London have fireplaces. I suppose it’s a safety consideration as much as anything when you’re living so packed together, but I grew up round fires, and I still miss them. I’m at home in Leeds this weekend, and though our fire doesn’t have the smell of coal that I love (our old stone house is in the outer regions of genteel suburbia, so we’re obliged to burn little smokeless briquettes), I can still spend hours stretched out on the hearth rug, toasting my back in front of the glowing embers and reading a book.

Oddly, when I’m back here, I have much less of a desire to turn on the TV, but then I suppose that, in my London flat, the telly fills the void left by the lack of a fire. L, my old housemate and a thoughtful fellow, has a theory that, when you come in from work, turn the TV on and slump on the settee in front of whatever old crap is on, you’re actually fire-watching. He reckons that for many thousands of years people have come back to the cave after a day out hunting or whatever, and spent a few minutes warming themselves, gazing into the flickering flames and taking stock of their day. When you sit watching the moving pictures of Come Dine with Me or The Simpsons (TV that a German friend of mine once described as ‘chewing gum for the eyes’) you’re just following a pattern of natural human behaviour stretching back to prehistoric times.

Speaking of primal and therapeutic activities, the opportunity to wield a massive axe comes rarely to the modern city gent, but another facet of open fires is that they give you a perfectly valid reason to chop wood. I spent yesterday morning hacking up some rounds of horse chestnut, which was hard work but hugely fun. 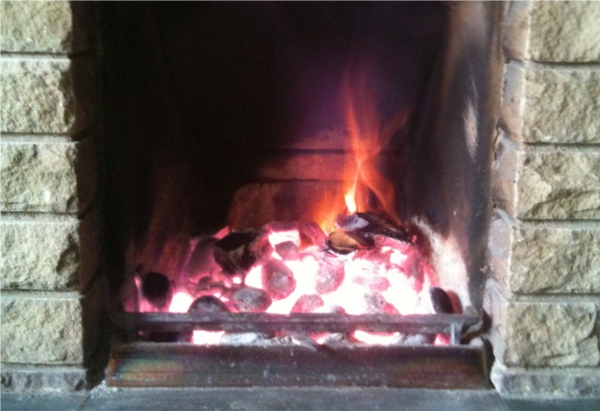