One of my favourite items of clothing in this soggy but not particularly cold weather is a leather jerkin of the sort that British soldiers used to favour during the Second World War, picked up a little while back from a surplus shop.

Mine is a reproduction (most of the originals apparently died the death on building sites in the 50s and 60s), but it’s pretty true to the real ones, even down to the offcuts of leather used around the bottom and the wool lining. Still, it’s a bit of a rarity (odd considering it’s not a million miles from the gilet currently so beloved of men in the 25-35 age bracket), and the fellow behind the counter in Peckham Rye last weekend remarked ‘You don’t see many of those about these days’.

The idea back when they were first used in WW1 was that, while keeping your trunk warm and dry, a jerkin left your arms more free than the greatcoats favoured by other nations. They were obviously popular because not long ago I saw an old photo of a gang of beardy lefties arriving to fight in the Spanish Civil War attired in much the same way. There is a faint sense of scruffiness and banditry about a jerkin which I like, and worn with a heavy jumper or overshirt it’s quite warm and waterproof enough for most conditions outside of proper winter. 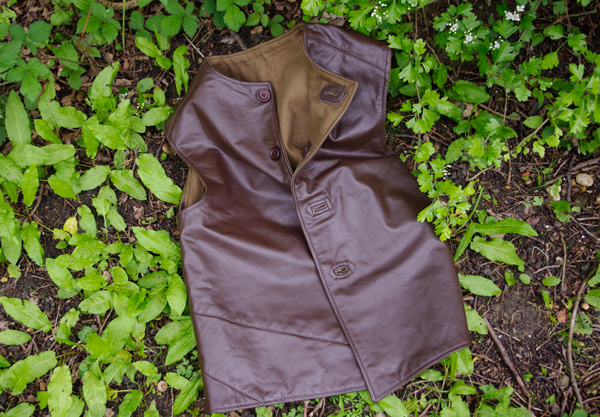 A leather jerkin also reminds me of The Third Man, a film which ought to belong on the top 50 film lists of anyone who’s ever seen it, not just because of Graham Greene’s excellent storyline, but also because of the sense of style that pervades everything about it. From the spotlighting, long shadows and decaying sets to the mannered speech and the iconic zither theme tune, The Third Man fizzes with character, and its costumes are no exception.

The functional jerkin belongs to the tough, cheery Sgt Paine (Bernard Lee before he became James Bond’s prickly boss man); the seedy Baron Kurtz has an old-fashioned, slightly creepy fur-lined coat; pulp writer Holly Martins wears oversized, inelegant suits; and even the angle of Orson Welles’ hat slanting across his moon face is more Zorro than Philip Marlowe. Pretty much the only person apart from Welles who is allowed to look dapper is Trevor Howard as Major Calloway, and it takes a particular kind of dash to pull off a combination of beret, pencil moustache and Paddington Bear duffel coat.

In case there is anyone in the wide world who hasn’t seen it then I’ll keep the details vague, but at one point there’s an excellent (and wildly historically inaccurate) speech as a very articulate man tries to justify doing very bad things.

‘Remember what the fella said: In Italy, for 30 years under the Borgias, they had warfare, terror, murder and bloodshed, but they produced Michelangelo, Leonardo da Vinci and the Renaissance. In Switzerland they had brotherly love. They had 500 years of democracy and peace, and what did that produce? The cuckoo clock.’