Some six months after I whimsically requested a free sample of the new 007 aftershave, I checked my postbox this morning to find a card with a slim plastic sachet attached, postmarked Taipei and urging anyone who happened to receive it in error to return it to Taiwan by airmail.

Naturally I wasted no time in applying all five drops of the precious, well-travelled elixir, and set off for work confident in the knowledge that the already slim gap between me and the other, more famous JB was one step narrower.

It’s an undeniably pleasant scent, a little bit floral and rather modern and subtle, but perhaps therein lies its essential problem as the self-styled fragrance of James Bond. Whether the 007 of your mind’s eye is the one from the books or any one of the six screen versions, Bond himself is far from subtle (John Le Carré once described him as a ‘gangster’, and when you compare him to Le Carré’s own Smiley or Maugham’s Ashenden you can sort of see his point), nor is he particularly modern (most noticeably in his frequent inability to tell the difference between a woman and a prostitute).

I know Floris No.89 was Fleming’s aftershave rather than Bond’s, but somehow I always imagined that the man himself might bristle with some old-school liquid incense of that sort. Apart from anything else, the literary Bond would have needed something fairly stiff to cut through the reek of fags and booze. Smooth, he may well have been, but sixty ciggies a day plus a vast and varied intake of alcohol must have given him breath that would hit your eyeballs like battery acid.

Anyway, perhaps it’s just as well that this 007 stuff is a little on the gentle side, since the testosterone levels of our emasculated modern man aren’t nearly high enough to carry off 1960s aftershaves. All the same, as I stood on the tube on the way to work, an attractive girl who I’d never met before nuzzled her head persistently against my shoulder. It’s possible that this was simply due to the crowded condition of the train, but I feel certain it was more likely the allure of my special secret agent’s musk.

I’ll be writing to Taiwan to request some more. 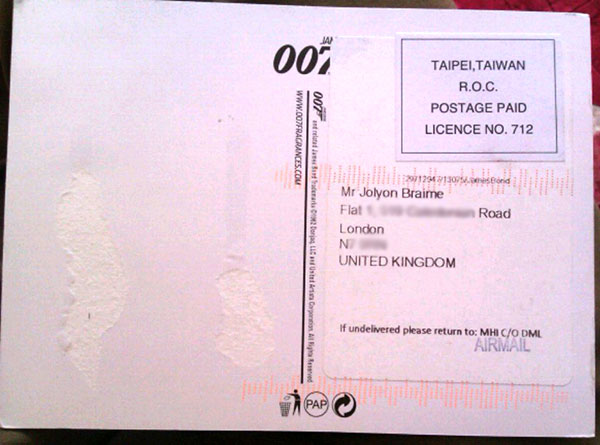