The policeman spoke slowly and deliberately as if to emphasise the hilarious transparency of my deceit. His mouth smiled and the rest of him did not.

After we’d explained what exactly the four of us were doing traipsing along the verge of the A12 at 9pm, and our two twitchy coppers had sped off to check that a car with the description and registration number of Christian’s little black Corsa was parked a mile or so down the road where we said it was, it did occur to me that their suspicions were not entirely unfounded.

Walkers, for example, would have had backpacks and maps, and would probably not have been clad in tracksuit bottoms and trainers, as Rik was. Had we had our wits about us, we might have thought to explain that all our trappings of hiker authenticity were stowed in a couple of tents on a farm a little way back, and that we were out searching for a pub supper, but having just walked 30 kilometres, mostly in the rain and with minimal food (in some circles this passes for enjoyment), our brains were no longer functioning at such a sophisticated level. Also it is a well known phenomenon that, whether victim or villain, everyone immediately becomes ten times shiftier when talking to the police.

It did not help our cause that I had accidentally co-ordinated my birthday walking weekend in Suffolk with Latitude, a large music festival a few miles away towards Southwold. Among the most genteel of such events, Latitude is patronised generally by 25-35s, overwhelmingly arty and liberal, and mostly female with tousled, straw-coloured hair and private educations. Nevertheless, a significant minority of the local populace appeared to fear that these Cath Kidston-loving rottweilers would escape to wreak havoc in the countryside, and some of our encounters in the villages were distinctly lukewarm.

As ever, of course, it doesn’t do to generalise. Christian was reliably informed by a cabbie that some of the local hoodlums took this annual opportunity to cause a bit of trouble, and plenty of people were nice to us along the way, but the atmosphere was perceptibly cooler compared to similar weekends I have known.

Brushes with the law notwithstanding, it was a rather lovely weekend. We ate Mini Cheddars in the ruins of Dunwich Friary and swam in the warm sea with Sizewell Nuclear Power Station hulking in the distance (I am fully expecting to mutate into a superhero within the next couple of weeks), while Ed cooked noodles on the beach. We tramped through nature reserves, across beaches and along the edges of wildflower meadows, and finished up in a sleepy hotel beer garden in Saxmundham where we spent two hours drinking ale and eating roast beef, with some kind of delectable balsamic strawberry panna cotta to finish. Luxuries taste all the sweeter when you’ve ached to get to them.

As we shifted our sore feet and watched the police car race off into the dusk to verify our story (I like to think with just a twinge of disappointment), Christian gazed after them ruefully.

‘Should have asked them for a lift.’ 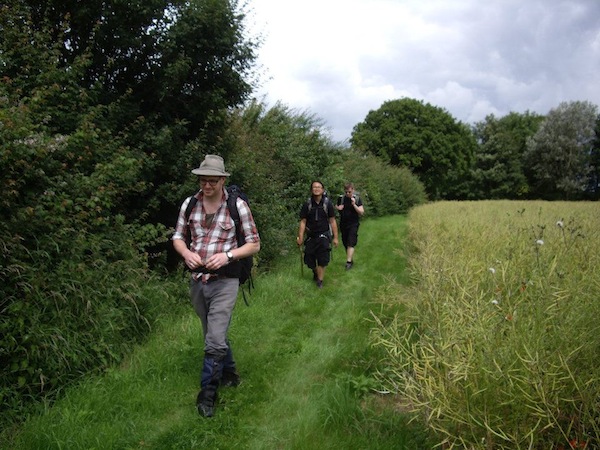