Lately, on the occasion of my trip to Venice, I decided it was time to retire my old panama hat. I bought it aged only just 18 from a poky little hat shop in Avignon, on my first lone trip with a backpack and a guidebook, and it’s served me pretty well for nearly eleven years since.

Originally a rather sharp trilby style, still fine enough to roll, it has been scuffed, stuffed in cupboards and bags, rained on and generally worn and torn. The elastic on its band has started to go, and a fair-sized chunk was removed from the crown once when Christian walked into a tree with it on. My repairs, originally fine operations involving pressing damaged fibres carefully together with superglue, have increasingly become rougher affairs involving patching over tears with masking tape and stiffened paper.

My new travelling panama is a handsome construction from Bates of Jermyn Street (now hiding at the back of number 73, Hilditch and Key), and will hopefully prove as hardy as its predecessor, which has now been transferred to a life of gentle duties in the back garden. 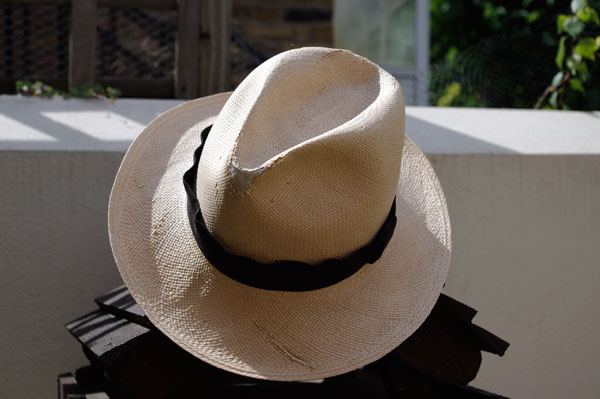