It’s through their works and not their bones that you see the people who have gone before.

The old Nidaros cathedral in Trondheim has had all the chequered history you’d expect from a mediaeval power seat. It was controlled by ambitious bishops who thought themselves a match for kings, and was, in its time, one of four corners of the pilgrim world (along with Rome, Jerusalem and Santiago de Compostela). It has burned and been rebuilt on more than one occasion, and after its power was finally broken in the reformation, about a third of it remained partially destroyed for hundreds of years.

When, in the 19th and 20th centuries, it was restored, and many of the old walls, hastily built in the aftermath of destruction, were dismantled, they found hundreds of old stone sculptures within them. The builders in former times had used whatever stone they could get hold of for the reconstruction work, and much of it came either from the ruins themselves or from nearby churches.

As it happens, builders in the middle ages appear to have behaved the same way in Yorkshire, and in the wall of the Georgian house I grew up in back home there is a clearly plundered stone featuring what looks like the face of a clergyman, positioned not far from what was once the privy.

Some of the Nidaros statues are on display in a part of what used to be the archbishop’s palace, and they remind you that in an age before art as we know it, artists worked for the church or the nobility, busily bending the rules and indulging their wild imaginations to create works which in later years would be deemed worthless, or possibly worse. I don’t know much about the history of the reformation in Europe, but if it was anything like the one in England, I wonder whether the concealment of these statues might have been their salvation.

Anyone who has ever visited the bright Lady Chapel at Ely cathedral will have seen the zeal with which the righteous have smashed away the faces of every statue in the room, and in religious and secular societies alike, the destruction of art or literature can be just as powerful as its creation. Yet for all the caliphs of Jordan, the iconoclasts of Byzantium, the Egyptian pharaohs who did their best to erase all memory of Akhenaten’s blasphemous reign, the Goscomizdat and the Index Librorum Prohibitorum, there are nevertheless periods of history where the dreamers flourished.

Looking at these statues you get a feeling like you are peeking back through history into the rather alien world of mediaeval Christianity, not unlike the picture of olde worlde Islamic culture that you might be left with after reading the Thousand and One Nights.

In one pleasing example, there is someone, maybe Jesus or St Olav, sitting on an elephant throne, only the sculptor has obviously never seen an elephant. There is a pair of nostrils at the base of the trunk, sort of where a sheep’s might be, and the tusks jut upwards from the front of the lower jaw like a wild boar. The trunk is flared at the end, but otherwise it is not a bad representation, and you’re left wondering how a stonemason living in Norway round 1250 could have gained even the most approximate picture of an elephant.

One fragment is labeled ‘part of a feathered woman’s breast’. Because of course such a thing is perfectly appropriate for a place of worship. There are lions (again, slightly conceptual ones), dragons and various fantastical creatures. In a pile of artfully-arranged old rocks is a gargoyle with broken wings, pinned-back, floppy ears, a wrinkled, outstretched neck and a face a bit like a horse.

In one row of faces, next to a woman in a veil, is the head of a blind man, dated 1210-40. It is painstakingly realistic, with the mouth slightly open and the individual teeth picked out within. The eyes are deep, empty sockets, framed by heavy brows and high, strong cheekbones. The nose has been broken off, but depending on what sort of nose it was, the blind man could be leering grotesquely or laughing with joy, his centre-parted hair swept back from his face.

This has not been sculpted from the imagination. The lines round the mouth, planes of the forehead and tiny wrinkles at the corners of the missing eyes are those of someone real, and you find yourself looking not just at the face of a man who you are convinced once lived and breathed but the hands of another, the tracks and chips of his chisel and the places where his tools have carefully smoothed the slightly hollowed cheeks. A master of his art, long forgotten yet looking out through someone else’s empty eye sockets into a dim exhibition hall nearly a thousand years later.

So many of these things lie forgotten until chance discovery brings them into the light again, but they are there, the people hidden in the walls. 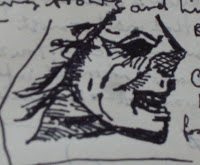