As E and I came into the main clearing, a short man in an oversized grey fleece, scuttling off past the toilet block with a couple of campers, turned and spotted us. ‘Squeak the squeaky and she’ll sort you out’, he called, gesticulating towards a little folding table outside a caravan with a large awning. Then he vanished off into the woods.

On the table was a ledger, its leaves flapping in the breeze, and an old-fashioned squeezy brass horn tied on with a bit of string. Obediently we squeaked it. After a couple of moments a small west highland terrier trotted out of the awning and looked us up and down curiously. There was a short delay, just long enough for us to start wondering whether it was the dog that was going to ‘sort us out’, then a cheery lady emerged from her caravan and we signed in.

Blackberry Wood campsite, not far from Lewes in Sussex, is the kind of place that childhood dreams are made of. And mine. Each of its modest number of pitches are set in their own private glade, screened by thick vegetation and complete with their own fireplaces and crude wooden benches.

Aside from its small handful of vintage caravans, there are some more eccentric accommodation options too. At one side of the main clearing, a 1965 Wessex Search and Rescue helicopter sits serenely by the hedge, its mossy rotors tangled among the tree branches, while a few yards away, at the end of a row of caravans, is a red routemaster bus with curtains in the windows.

It seems a shame not to camp, though, and we had a grand couple of nights in a small glade grandly named ‘Stonehenge’. The robins and blackbirds are so tame that you have to gently discourage them from sharing the food on your plate, and once night falls, the only signs that you are anywhere near other people are the glow of fires through the foliage, the smell of woodsmoke and grilling meats and the murmur of subdued voices.

I think it’s open all year, so if camping is at all your cup of tea and you want a place within striking distance of London then you should definitely go. Maybe walk a bit of the South Downs way while you’re there. 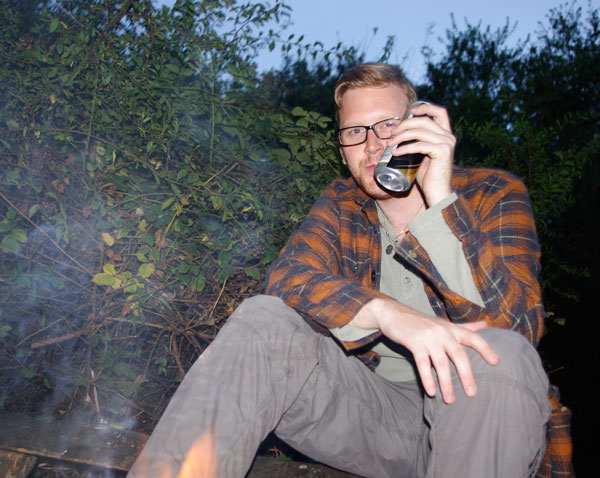