Is anyone else getting a bit bored of Downton Abbey? I used to quite like it, but I think it’s probably gone a season or two beyond its sell-by date. These days they’re recycling storylines more or less wholesale, and the Christmas special was so cloyingly saccharine and earnest that I kept waiting for one of those mute kids who appear now and then for five seconds before supper to stand up in a moment of silence and call out ‘and God bless us… every one!’

Still, if there’s one team working on the production which isn’t running out of steam, it’s the wardrobe gang. Everyone looks pleasingly dapper, right from the king of the castle down to the kitchen staff on their day off.

I know the 1920s were a long time ago, but there are still occasions in the 21st century where natty dressing isn’t so very out of place, and I happen to think that a little eccentricity in your clothing from time to time isn’t altogether a bad thing.

With that in mind, here’s how I reckon you channel the Crawleys and their minions:

Lord Grantham has been tempting me towards a Norfolk jacket since the first season, but they’re really expensive and unless you spend your weekends grouse shooting (hands up? Anyone? Oh…) then there aren’t really a whole lot of occasions where you can pull one off.

A half Norfolk, on the other hand, is understated enough to give a winter suit a bit of a countrified look without tipping over into costume. Cordings of Piccadilly – owned by Eric Clapton, no less – does a great half Norfolk jacket (that’s to say, like a normal tweed sports jacket, but with shoulder pleats, patch pockets, a belt panel across the back and a collar tab) in keepers’ tweed, with matching trousers and waistcoat. I bought just such a suit a couple of years ago with the proceeds of an unexpected freelance job, and it’s normal enough to wear all over the place, while still unusual enough to be eye-catching.

Most of the time you’d wear it with a tie, I’d have thought, but it does look good with a day bow too. They don’t really seem to be the thing these days unless you’re wearing them with turned-up jeans and a short-sleeved shirt, but I love a bow tie, and sometimes wear them to weddings and smart parties and stuff if I reckon I can get away with it. A nice paisley one from Peckham Rye goes beautifully with a tweed suit.

Pairing a suit like this with a hat is probably a step too far for me, but if you’re a more daring dresser, then I reckon a Burlington from Bates of Jermyn Street (or a York fedora from Lock & Co if you’re feeling particularly flush) would complete it nicely.

There’s a brilliant little clothing company called Old Town (based out of a shop in Holt, Norfolk) who make up classic Edwardian-type workwear suits in cotton drills, linens, tweeds, corduroy or whatever you fancy. They make them to order in their own workshop, so it takes a while for them to turn up, but they look grand and they’re worth the wait.

I’ve got a suit in navy cotton drill (sort of like the stuff you make boiler suits out of) comprised of their Vauxhall trousers, Marshalsea jacket and a straight-edged waistcoat. It’s terribly handsome. Team it with some button-on braces, a pair of nice shiny Doc Martens and a Toni tweed cap from Bates, and one might get an appreciative glance from the visiting dowager/Macchiavellian under-butler. 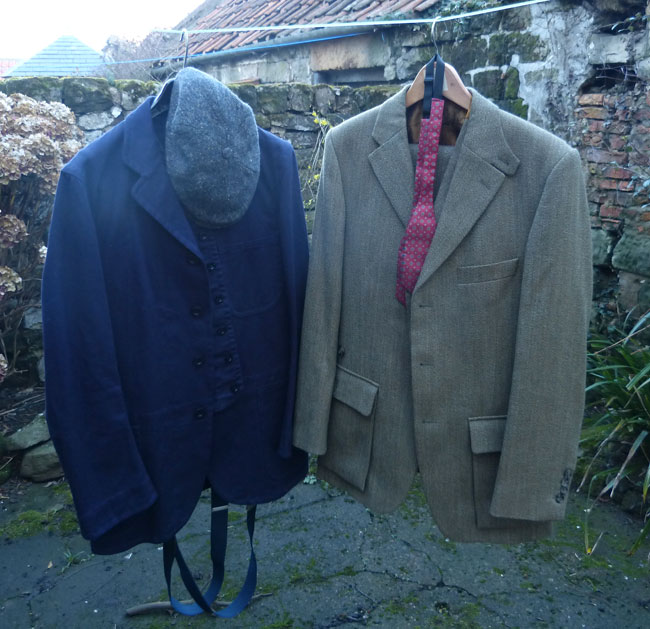