It’s odd that the feeling of ignorance you get from visiting the Pig and Butcher on Liverpool Road should be so enjoyable.

Seven and a bit years ago now, in the days when I wrote and edited for Itchy, what is now the Pig and Butcher was called the Islington Tap, and it was directly next door to our office. In fact, the building we worked in was called White Horse Yard, after the pub’s former incarnation as an IRA boozer.

All such political leanings had long since left it by the time we used to drink there, along with most of its customers apparently, and most nights the Tap was a tumbleweed sort of a place. The exodus of punters was further accelerated by the dual factors of the Regent opening up just down the road and a buy-out by a bunch of Russians who painted the walls a creepy lilac pink and jacked up the bar prices. Obviously when the football was on it was always packed to the rafters, but then that’s true of every pub within a two-mile radius of the Emirates stadium.

One peculiar thing about the Tap was its almost universally attractive female bar staff, presumably the direct result of the hiring policies of the bar manager, Pablo. He was a gregarious lecher with a welcoming grin whose hands were permanently all over his barmaids like a Hispanic Mister Tickle. One day announced he was leaving to become a travel agent.

Anyway, I have some fond memories of the Tap, but its day had been and gone, and last year it reopened as the Pig and Butcher, a rather upmarket place with an on-site butchery providing meaty treats and a fine selection of bottled beers (there’s draught too, but it often seems a shame to go for a jug when you have a Kernel Pale eyeing you up from the fridge).

The food is magnificent, but you always feel like a bit of a moron trying to make sense of the menu. It’s a sensation not unlike trying to decipher a menu that’s been badly translated from Spanish (a favourite bar in Peru used to list red wine as ‘she came I tint’), except that they’re all real words – you just have no idea what they mean. Rillettes, anyone? How about a bit of cavolo nero? Last night I had monks’ beard, which sounded hideous but turned out to be a flavoursome, weedy-type thing that reminded me a tiny bit of a cross between samphire and that stringy lettuce you get in pre-mixed salads. It was delicious anyway.

In short, if you find yourself in that part of the world then you should definitely treat yourself, and if sautéed lambs’ tongues are on the menu then you should put squeamishness firmly to the back of your mind and get stuck in.

Oh, and this is monks’ beard… 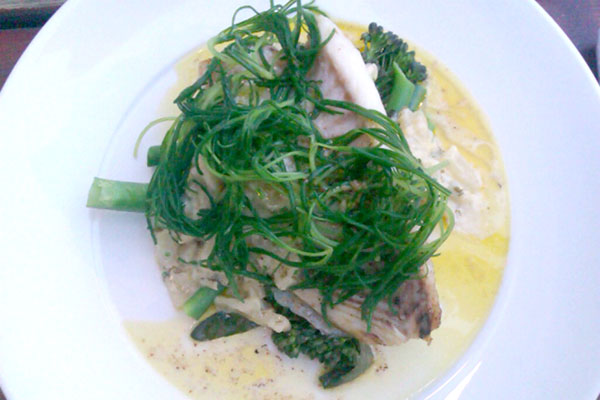