I’ve been keeping it reasonably quiet during the planning stages, but yesterday my name appeared on the official website for people attempting the Green Ribbon 2015, and it is all suddenly beginning to feel very real.

The Green Ribbon, (or Gröna bandet) is a fairly new, long-distance hiking challenge, covering around a thousand miles through the Swedish mountains. I’m reckoning on it taking me around two and a half months, and success is by no means guaranteed.

For anyone interested in the route, it runs very roughly along the Swedish-Norwegian border, starting or ending at Grövelsjön mountain hut and the cairn at Treriksröset (where Norway, Sweden and Finland meet). You can walk it in either direction, but I’ve opted to begin at the southern end and make my way north to Treriksröset. There’s no set trail as such, just a series of points that you have to pass either through or west of. Towards the north, there’s the opportunity to walk the famous Kungsleden, but otherwise I’ve spent the past couple of weeks with fourteen ‘Fjallkartan’ mountain maps, the internet and a 2B pencil. No doubt I’ll end up deviating from the plan once my boots are on the trail, but it’s a start.

I’ll mostly be camping wild in the mountains (while crossing my fingers that there is no repeat of last summer’s fiasco when two faulty sections of my tent’s ridge pole sheared without warning in the middle of the night, two weeks into a month-long trip), with pit-stops roughly every couple of weeks to resupply, drink a bit of beer and remind myself what a bed feels like. Some people choose to post supply depots ahead of them to towns and mountain huts along the route, but I’ve decided (perhaps rashly) against that, on the grounds that there should be enough opportunities to pick up the supplies I need in settlements and possibly mountain stations en-route. I’ll need to be a bit flexible, and perhaps rather cautious about keeping a cushion of spare rations, but in many ways being tied to hitting certain towns isn’t all that different to being tied to hitting depot boxes.

Part of the deal if you attempt the Green Ribbon officially is that you carry a SPOT satellite tracker, and while this is mainly for safety purposes, it does also mean that anyone who wants to will be able to find my last recorded position on the Gröna bandet website. My mother will be pleased.

I’ll fly out in early June (it’s looking now like my provisional start date might be the 10th), and in the meantime there’s still a lot to do. Apart from the route planning, I’ve been trying out a few refinements to my gear after last summer’s Norwegian adventure, and there are various other bits and bobs that need sorting out in order to put my life on hold for two months.

Anyway, that’ll do for now. I’ll be posting more details and thoughts in the run-up (and during, if I get the chance). In the meantime, cross your fingers and toes for balmy weather and an unseasonably low mosquito count this summer… 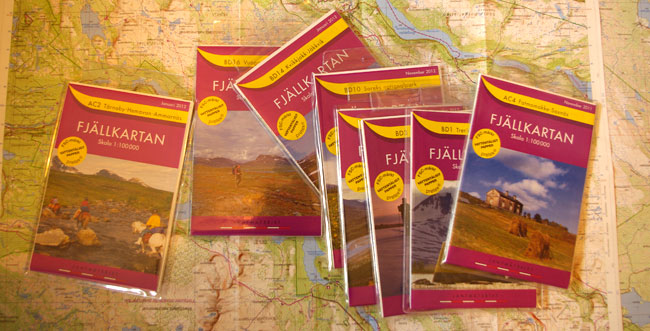