I’ve just been listening to Swamp Thing by The Grid. The whys and wherefores are not important, but it was on a playlist with Cotton Eye Joe, Mambo No 5 and Scatman. Great video as I recall, Swamp Thing. I seem to remember it being a bunch of guys who looked like they’d just stepped out of the Matrix ‘avin’ it large with banjos over the top of the backing track from Saturday Night by Whigfield.

Anyway, all this Lightwater Valley music made me think it’s been ages since I went to an old-school carney. They’re getting increasingly difficult to find. A couple of years back, to widespread scorn, Laurence, Ed and I went down to the New Year’s fair in Green Park, but that Christmas regular turned out to be the last of its kind. In Christmas of 2007 they replaced it with the altogether more genteel Hyde Park Winter Wonderland. Featuring ice skating and a twee German market. The perfect setting for one of those Meg Ryan films my mum likes, but hardly a land of adventure.

Now call me an easily pleased northern hick, but there’s nothing like strapping yourself into a whirling heap of rusty scrap metal operated by a sullen, acne-riddled bastard more interested in his copy of Razzle than the fact that the machine’s motor is screaming imminent disintegration over the thump of the 90s dance backing. All the better if the machine is painted with very approximate representations of Tom Cruise in Top Gun and Kim Basinger in The Getaway.

As we stepped onto our first ride in January 2007, Lozzer, Ed and I had all worked out that none of us had been on any form of adrenaline ride in at least six years, and I for one was even a teeny bit nervy. The machine itself was metallic pink; one of those things that flings you back and forth in a little open pod on the end of a giant pendulum. I have a feeling it spun us around as well. The first time we went all the way over we were roaring in the anguish of icy terror, our cheeks pinned back by the force, tears streaking back towards our ears. The third time we were laughing. This is entertainment.

Staggering away like triumphant drunks you look back at the attendant, who doesn’t give a shit that you’ve just faced your fears and emerged with flying colours. Some guy on a mic is giving it a bingo caller-style patter, trying to get people to pay him a fiver and try some impossible challenge in the hopes of winning a 50p pink bear that’s previously been used as a mule for crack rocks. Like landing a ping-pong ball in a flower pot from 15 feet, or hitting four consecutive bullseyes with an air rifle where the sights are so far out you’d be lucky to hit a camper van. If you really fancy dicing with vom you could get some candy floss too.

Ed still has a picture of him and Laurence plunging down a juddering mini-roller-coaster, innocuously called The Mouse. Good times.

So yeah, where can I find a carney? 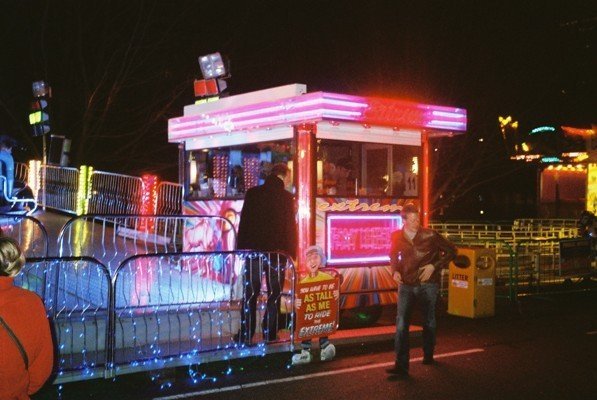